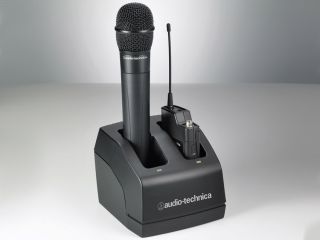 The ATW-CHG2 has many protective features to preserve the integrity of the transmitters. A built-in safety feature monitors cell voltage and automatically turns off the unit if problems are detected.

The unit will also automatically shut off if damaged or alkaline (non-rechargeable) batteries are installed. Maintenance charging prevents battery self-discharge until the transmitter is removed from the charger. Two AA 2000 mAh Ni-MH rechargeable batteries are included.

Other recent enhancements to the 2000 Series include the addition of a second operating frequency band for more flexibility and increased number of simultaneous usages (Band I: 487.125 to 506.600 MHz). The transmitters' designs have also been updated with charging contacts.

Additionally, a two-position switch on the receiver turns on/off the 12V AC antenna power for use with powered antennas or other in-line RF devices and accessories.