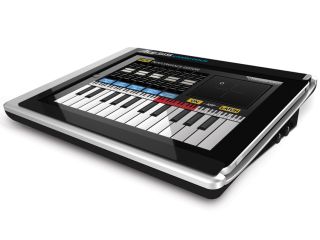 NAMM 2011: Alesis has unveiled the StudioDock, a new iPad dock that endows Apple's tablet with audio, MIDI and video I/O.

The key point to make about this is that it promises to be Core Audio and MIDI compliant, meaning that it should work with most music making apps rather than just those that have been specially written to support it.

# The world's first pro audio dock for iPad
# Connect microphones and instruments including guitar, studio monitors, PA speakers, headphones, and MIDI controllers
# Universal device works with virtually every audio and MIDI app in the App Store; Core MIDI compliant
# Perform, craft, create and play back music in virtually any conceivable manner or location
# Video output for connection to TVs and projectors
# Inputs: two combo XLR-1/4" for use with audio gear, instruments, and computer audio
# Input channel gain controls and switchable phantom power for use with condenser microphones
# Guitar-direct switch for use with amplifier- and effects-modelling app
# Outputs: pair 1/4" and 1/4" headphone with separate volume controls
# Control: MIDI In, MIDI Out, USB MIDI, and assignable 1/4-inch footswitch input

The only downside is that it looks like a power supply is required to run StudioDock, which would make your iPad studio significantly less mobile. Still, we like the idea; Apple Certification is pending, as is the announcement of a price and release date.