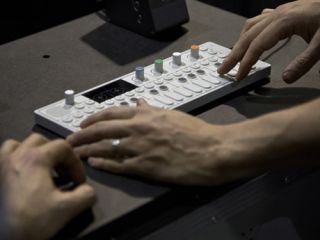 The OP-1: it's not finished yet, but it's getting there.

TC Electronic may just about have been able to back up its claim that it had the "product of 2010" at NAMM (albeit one that carries out the relatively mundane task of tuning your guitar), but if you were looking for the wow factor, surely nothing in Anaheim could beat Teenage Engineering's OP-1.

MusicRadar has already delivered its own video of this synth/sampler/controller/ in action, but we thought you might like to check out Teenage Engineering's own rough-n-ready preview clips, too.

As you'll see below, they show off a range of the OP-1's features - check 'em out and have your excitement levels raised by at least another notch.

The tape reverse and break feature in action.

Did we mention that the OP-1 is a virtual 4-track tape recorder?

The Teenage Engineers seemingly spent their NAMM evenings giving the OP-1 a thorough workout in their motel.

When it's finished, the OP-1 will boast a range of synthesis types, but only the pulse engine is currently operational.

More late-night jamming - did these guys actually go to bed?

It's like the fly you don't want to swat.