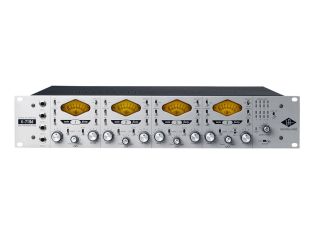 At the core of the 4-710D are four channels of tone-blending "Twin-finity" mic preamps with true-bypass 1176-style compression. Based on the original award-winning 710 Twin-Finity preamp — favored by engineers including Al Schmitt (Jackson Browne, Dr. John, Diana Krall) and Matt Boudreau (The Samples, Sean O'Brien) — each of the four mic preamp channels allows for continuously variable tone between 100% tube and 100% solid-state.

Other notable 4-710D features include:

"While UA enjoys a reputation for classic hand-built analogue equipment, we're not content to live in the past," commented Universal Audio President Matt Ward. "The 4-710D is another example of us pushing forward, giving customers modern conveniences like high-quality digital outputs, and the ability to blend between tube and solid state tones — a feature not available anywhere else."

"The 4-710D is the result of several Universal Audio technologies converging into a great product," offered 4-710D Product Manager, Lev Perrey. "Ultimately, the 4-710D is a fantastic addition to any mic preamp arsenal, and we believe customers will be amazed by its awesome balance of classic tone and flexibility."

About Universal Audio Inc
Founded in 1999 by Bill Putnam Jr. and based in Scotts Valley, California, Universal Audio is best known for its vintage analogue reproductions and advanced Digital Signal Processing technology, including the award-winning UAD Powered Plug-Ins Platform.

The company is focused on merging the best of classic analogue and modern digital technology. UA is devoted to this endeavor, following its rich recording heritage and motto, "Analogue Ears. Digital Minds."