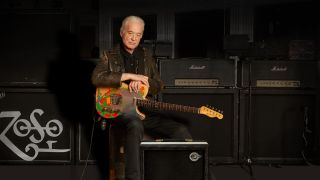 NAMM 2020: Jimmy Page introduced a limited-edition 'forensic clone' of his iconic 'Sundragon' amp at Winter NAMM last year and then first announced the follow-up Sundragon Standard Edition model in summer. More details of the latter are now beginning to emerge.

The initial limited edition Sundragon painstakingly recreated the heavily-modded 1959 Supro Coronado that Page favoured during the recording of Led Zeppelin's debut album and various session gigs. That was limited to a run of just 50, which sold-out immediately.

The new Sundragon Standard may sound like an attempt to place those tones in the hands of mere mortals, but it is still hand-wired, point-to-point, and built in New York by Page's collaborators Mitch Colby and Perry Margouleff. The amp is constructed much in the manner of the original, with separate chassises for the power and preamp sections, while a Jensen Special Design speaker completes the combo.

There's no price announced yet, but we would suggest it's likely the Standard is unlikely to fall in the 'affordable' end of the spectrum, despite its moniker. It's at this year's NAMM, though, so more details as we get them...