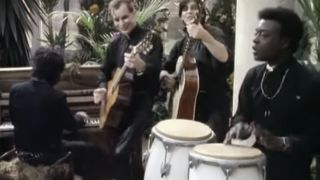 Andy Anderson, a former drummer with The Cure, has died at the age of 68, it’s been confirmed.

Anderson played with the band between 1983 and 1984, appearing on the albums Japanese Whispers, The Top and Concert. He also played on The Love Cats, The Cure’s first UK Top 10 hit, and one of their most famous singles.

Anderson also played with many others artists and provided music for TV commercials. A Facebook post last week revealed that he had been diagnosed with terminal cancer, and he died on 26 February.

Lol Tolhurst, a founding member of The Cure, was among those paying tribute to Anderson on social media.

It's with a heavy heart, I have to report the passing of a Cure brother.Andy Anderson was A true gentleman and a great musician with a wicked sense of humor which he kept until the end, a testament to his beautiful spirit on the last journey. We are blessed to have known him.February 26, 2019