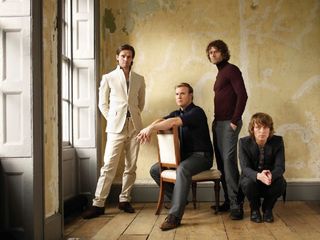 Take That: the new Fab Four?!

Take That have won a second Silver Clef award, which makes them 'better' than The Beatles and the Rolling Stones, officially, because the '60s legends have only ever won once.

The Silver Clef awards are given for songwriting achievement by Nordoff-Robbins Music Therapy. 2009's O2 Silver Clef Lunch was a fundraiser for the charity held at London's Hilton hotel on Park Lane on 3 July. Take That first won a Silver Clef in 1995.

On hearing they had won a landmark second Silver Clef award, Take That singer Gary Barlow announced the quartet would make a £50k donation to the music therapy charity.

Other winners at this year's event included: