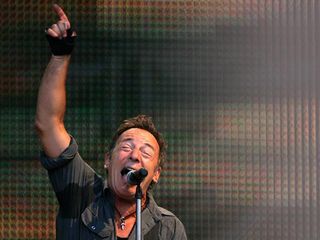 Bruce at 60. No signs of slowing down (Image credit: A4014 Marius Becker/dpa/Corbis)

Bruce Springsteen And The E Street Band began their last concerts at New Jersey's Giants Stadium last night - the venue is being demolished to make way for a larger one - and The Boss debuted a new song just for the occasion.

"Evening, New Jersey! Nice to be in my backyard," Bruce said to the crowd of 80,000. "Joining us tonight to shut the old lady down?

"We've had a lot of great nights here," he added (these concerts will make 19 in all). "Let's make this another one." And with that, Springsteen, who just turned 60, kicked off the three-hour, 13-minute show.

"I was raised out of steel here in the swamps of Jersey/ some misty years ago/ through the mud and the beer/ and the blood and the cheers/ I've seen champions come and go," he sang. "So if you've got the guts mister/ if you've got the balls/ if you think it's your time, then step to the line/ and bring on your wrecking ball"

The new anthem received a thunderous ovation, but it was Bruce's complete reading of the Born To Run album that brought the audience to its feet - and knees.

Springtseen has four more nights to go in his Giants Stadium-closing run, and he's promised to Play Darkness On The Edge Of Town in full as well.

Twenty-nine songs. What a slacker at 60!