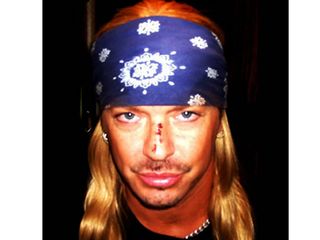 As everyone surely knows by know, Poison vocalist Bret Michaels was clotheslined by a piece of descending stage scenery at last Sunday's Tony Awards. And now the hair metal rocker has his nose out of joint in more ways than one, blaming everyone involved in the proceedings for his busted proboscis and wounded ego.

All of which makes me pose the musical question: Does Michaels have a leg to stand on? (Metaphorically speaking, of course.)

While at first it appeared that Michaels, who performed Poison's lamentable Nothin' But A Good Time with the cast of the equally lametable Rock Of Ages - c'mon, the music was excruciating 20-odd years ago, and time hasn't aged it like a fine Pinot Noir - along with the members of Poison, was fine, it was later disclosed that the singer suffered a broken nose and split lip from his intimate encounter with the stage prop.

Michaels' people lash out at Tonys

In the days following the TV smash-up, Michaels' spokespeople took the Tonys to task for failing to warn the vocalist about the prop and not stopping the piece once Michaels was hit by it (or, to look at it another way, when he strutted into it).

Michaels' rep also aimed fire at Tony Awards host Neil Patrick Harris for a joke he made following the incident, in which the actor said that Michaels "gave headbanging a new meaning." (A funny line, ad-libbed or not.)

"It is unfortunate that the show's host made light of the situation without having any knowledge of the severity of Bret's injuries," Michaels' reps said. "Had this incident happened to Liza Minnelli, Dolly Parton or Elton John the Tonys would have at least issued a letter of concern."

Michaels: "There was no official mark"

Writing in his own blog yesterday, Michaels echoed his reps statements, saying that the Tonys' initial statements that he was fine and had merely "missed his mark" were "irresponsible."

"First, I thought, 'what mark?' as there was no official mark," Michaels wrote. "No matter what the situation was the prop should have been stopped or at least slowed for a few more seconds until I cleared the stage...For God sake, they have at least a five second delay to prevent the airing of unapproved expletives and nudity!"

Having viewed the YouTube clip of the incident numerous times, I'm of the mind that Michaels' fault lies not in his stars but in himself.

He claims that he wasn't told about a 'mark,' and his reps state that the singer wasn't warned about the imminent danger of the descending stage prop. But how is it, then, that the entire cast of Rock Of Ages, not to mention the members of Poison, holding guitars no less, had the presence of mind to spin on their heels and beat a hasty retreat?

In my view, Michaels, caught up in a rare moment of Broadway applause, was too busy basking in glory to think, "Hey, wait a second...I'd better vamoose or else I'm gonna ka-bong myself but good?"

Seriously, check the tape again below. Everybody but Michaels splits pronto - they hit their 'marks' with true Great White Way precision. Even C.C. DeVille - c'mon, that's gotta count for something.

Bret Michaels, sorry about your lumps. Really. But laying blame on The Tonys isn't the way to go. Next time (if there is a next time), Open Up And Say, "See ya!"