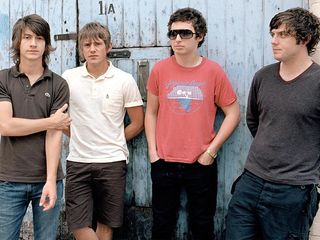 We haven't had an Arctic Monkey third album update since new track Crying Lightning was previewed at Australia's Big Day Out, so it's about time.

Those cheeky chaps have posted a video called The View From… Rehearsals, offering a sneak peak into studio life, thoughts on the current global economic crisis and, most importantly, some new material.

It's not much - 15 seconds to be precise - but it does feature the band's live engineer John Ashton on piano.

There's also an interesting cover of Lady GaGa's Poker Face. Whether it ends up on Radio One's next Live Lounge compilation (probably) remains to be seen. Next up they're off to New York for "a spot of recording" to "finish off the album". Only "a few more songs to do"…