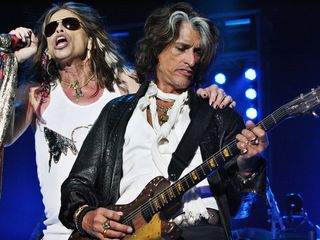 Aerosmith's recent dramas involving singer Steven Tyler are becoming music's newest drinking game: down a shot every time a band member says something about the trouble-plagued vocalist and you'll wind up smashed in no time.

At a book signing last weekend, drummer Joey Kramer confirmed the band is experiencing "personal differences" and is looking for a new singer should Steven Tyler make good on his promise to depart to pursue "Brand Tyler."

And what kind of singer would the band seek out? "A real, real good one," Kramer said.

"Just like writers write and dancers dance, we're musicians," he said. "We make music. That's what we want to continue to do, so whatever we have to do to move forward in that direction, that's what will happen."

Kramer's comments come in the wake of guitarist Joe Perry's assertion that Tyler has "quit as far as I can tell." (Just days after making that statement, Tyler jumped on stage at a Joe Perry Project gig, surprising the guitarist and the crowd, and announced, "I am not leaving Aerosmith."

All seemed hunky-dory at the show, but in an interview with Billboard, Kramer and Aerosmith co-guitarist expressed doubts and concerns.

"Steven, he isolates more and more all the time," said Kramer. "That's what gives it away to me that there's something going on. I don't know what that is. I know he's made some not so great choices and he's got some negative influences around him now. I love the guy. I just want to see him get some help."

Just how bad are Tyler's problems?

Tyler has a history of substance abuse, and Whitford said, "You have to be suspicious that this is something that's probably going on with him. I have a feeling we might be looking at someone who's just really struggling very badly."

Whitford described Tyler's recent behavior as "becoming more erratic and unreasonable." Kramer echoed Whitford's feelings, saying, "I have called him and left voice mails and texted him to no avail."

Whatever happens, Whitford said the band wants to move ahead "sooner than later." Still he was of mixed emotions that Aerosmith's next chapter would involve Tyler, saying, "I have my doubts about us being able to pull this off any time soon."