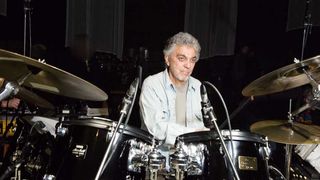 Steve Gadd has enjoyed a long and fruitful career with Yamaha and has played a key role in the return of the company's iconic Recording Custom kit.

We caught up with the drumming legend to talk about his link to the Recording Custom past, present and future.

Tell us about your input into the original RC?

"I bought a set of Gretsch drums and toms for what I was doing, but the toms didn't feel right to me. I kept the bass drum and I got a set of Pearl toms, the eight drums with one head on 'em, and I had two heads put on them and started using 10", 12", 13" and 14". I did a lot of recording on those drums. In doing that I learned, just by trial and error, the difference that bottom heads make, the difference that the type of heads you use make, there are all kinds of variables. I had given [Yamaha] whatever information I had, and we applied it to the Recording series."

A lot of people adore the sound of your drums and the way you play. How much of it would you consider is down to the drums you're playing?

"I knew people liked that kit, and I liked it and thought it sounded great, but I wasn't aware of how big an impact it had. I was just doing gigs like everyone else, trying to get the drums to sound good. I wasn't really paying attention to sales. My thing was to give [Yamaha] information to try and make the instrument sound good, then it was back to work again."

This year marks 40 years of the RC. Why do you still play Yamaha? what excites you about the drums?

"They're great drums. Yamaha has been very good to me in terms of trying to accommodate whatever ideas I had about how to make it sound better. They've supported me along the way with gear when I've needed it. I've made a lot of friends at Yamaha. I was friends with Hagi [Yamaha's Takashi Hagiwara] for years and years. We'd hang out when I went to Japan, I know his family and his kids, he's been to my house in the States. I still talk to Hagi. I made great friends at Yamaha and they take good care of me. They're a great company."

You have said Yamaha drums give you confidence?

"If you have an instrument that feels good and you know the engineer's got the sound that's right for the music then that gives you confidence, and Yamaha have been pretty easy to get to sound right for whatever music I'm doing."

You've played Recording Customs in jazz, rock and funk settings. Did you consciously keep playing the same kit because it does everything you need?

"They worked pretty much for everything. I had different sizes I could use for different things. Sometimes I would start with the 12" and 13" and go 14" and 16". You can make little changes that are right for the music. The other thing that's nice is that these drums respond to the way you tune them. You can make one drum sound a lot of different ways. I think that's important for doing a variety of different kinds of music. It wasn't like I wanted to create something for myself, I was just doing whatever I had to do to play the music and make it sound as good as it could sound, and Yamaha always came through."

Tell us about your involvement with the new RC?

"[Yamaha] brought in new gear, we'd go in a studio and I'd check different bass drums out and we'd make notes about if I thought it was sounding better or worse. First, we had to get a system together. If you're checking out different plies of wood you can't have different heads. You have to have the same heads, the same muffling. It took a while to get the system together, and then they'd bring in different things to try out and I'd just tell them what I thought. We worked on the bass drum a lot to try and get some bottom in it.

"With the toms they took things a step up. They still feel like the Recording Custom, but when you take them out of the box it's not like they feel new. They feel comfortable, and I think that's good. I'd go to Japan and we'd take an afternoon and we'd try out different bass drums. Then I'd go back to Japan six months later and they'd have done some of the changes and we'd try those things. It was a lot of back and forth.

"We did it with the toms and we spent a lot of time with the snares. Just like trial and error. If you've got three drums - steel, aluminium and brass - and then you've got different rims you can put on all of them, it takes some time to go through everything and come up with information that you think is solid. You can drive yourself crazy in a room with a bunch of different snares. After a while you just don't know, but we stuck with it and this is what we ended up with."

With the new Recording Custom, what was the one thing you knew you wanted to be different?

"I wanted to work on the bass drum and the snare, and that's what we did. I think the bass drum has got a nice fat sound. It responds to different heads. We tried different rims on the snare drums. I have certain things that I like, certain head combinations that I like and think make a big difference. I think we've made some good improvements."

"We found out that a six-ply shell seemed to have more bottom than the eight-ply. It seemed to open the drums up, they respond well to tuning, they speak. They can go a lot of different ways. The other thing I wanted to do was to have drums that have a good tuning range so you can apply them to different types of music that you're doing, and these drums do that."

All the snare shells are 1.2mm thick and feature the outward seam.

"I like that. I thought it should be a simple snare drum. I wanted it to have a range so you could tighten it up, or if you wanted it to sound fat you could loosen it up, and I wanted the drum to respond to that. I had old snares I'd played that I liked and gave Yamaha information, and we applied that. The outer bead... I played an old Ludwig snare for years. I liked it because I could just go buy them in the '70s and right out of the box they sounded good.

"That was my goal, to have a Yamaha snare do the same, sound good right out of the box, and have a range of tuning where you could use it for different kinds of music. I think it's important for my sound that they use a Diplomat on the snare side, a thin head. And then I change the top head. I like a Coated Ambassador a lot of the time. I change the top heads but I keep the bottom a Diplomat because the drum doesn't choke up, it just keeps getting bigger and bigger when you hit it."