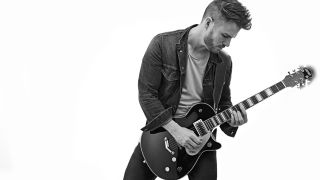 Start your journey into authentic blues lead with a quick look at a simple way to structure your own solos.

With its ‘hand me down’ tradition of learning, each generation of blues guitarists is influenced by the last, in turn keeping the spirit of the original pioneers alive. When it comes to soloing, simple ideas such as call and response or repetition have a long history in blues - and these concepts can help your own solos unfold and flourish.

Don’t know what we mean? Well, it’s really just a matter of playing bite-sized phrases, then repeating and altering them. Read on as we break down a 12-bar solo into three steps and just a handful of core licks.

We begin our solo by playing two phrases across four bars of music. Try to think of these two lines as a question and an answer - the first line sets up a melody; the second brings it to a conclusion. The chord stabs break up the melodic lines and actually helps you to phrase your solo.

In the next four bars we repeat the two phrases but with some small improvised changes - this is where you start getting creative. A pro’s trick is to flip between pentatonic scales (major or minor, depending on the feel you’re after) but also to target the notes of the chords in the I-IV-V progression as they pass.

By landing on the B note we can adjust our first phrase to fit in with the E7 chord. That’s because B is found in the E7 chord (E G# B D). You don’t need to know the theory - just try to land on any note of any E7 chord you know. We’ve played through each lick and the full solo for you. Take a listen!