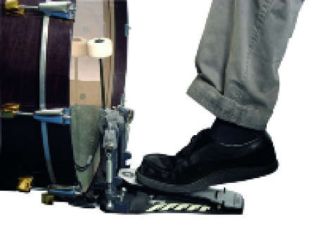 Previously we've looked at a number of physical and mechanical (ergonomic) factors affecting bass drum technique. We discussed the importance of understanding mechanical principles such as dynamic levels, anticipation, velocity and momentum. We also compared the physical merits of the respective techniques.

There are many physical variables to consider when using heel-up techniques on the bass drum. This is because of the increased range of motion available, which is not so much of a consideration in heel-down techniques.

Furthermore, when looking across the whole spectrum of musical styles, we find we play many different combinations of notes on the bass drum - for example, single notes, double notes, sequences of singles and doubles to create common phrases, and multiple notes, all of which combine to create musical patterns.

With this in mind, it's important to examine some common heel-up techniques and to highlight some of the ergonomic factors that are involved.

Hop 'til you drop

One useful heel-up technique is commonly referred to as the leg stroke.

This technique is used most effectively for playing single notes, and involves a hopping and dropping motion. From the starting position (see the image above), the heel is lifted from the floor using a hopping action, which releases the beater.

The above image shows a heel-up release to approximately 60 degrees and the two images below show the leg and foot dropping down towards the floor to play the stroke, which finishes where it started - in the resting position shown in the first image.

As discussed previously, please remember that we can release the beater to any dynamic level, and by paying attention to the principles of momentum, speed and timing of release, we can control the desired volume and sound of the stroke.

When using this technique it is important to play the stroke with the ball of the foot as you drop back down, allowing the heel to drop and rest naturally, immediately after the stroke has been played. Also, take care not to lose contact with the footplate during the hopping action - although this contact should be minimal and just enough to allow the release of the beater without losing physical control.

All in all, the leg stroke is a physically efficient technique, as it ensures that the leg can rest in between strokes, which, considering the sheer amount of single notes we play on the bass drum, is an extremely important physical consideration.

It is possible, of course, to start and finish the stroke with the beater placed in the drum head, and many drummers feel comfortable doing this. However, using this technique exclusively can increase the risk of restrictive physical tension, given that the leg cannot fully relax when holding this position (see the below image).

Remember, tension in the legs will eventually cause tension in other parts of the body - there's no escape! Also, leaving the beater in the drum head can affect the quality of the tone, and volume, of the stroke. Try experimenting with and comparing these techniques for yourself. How does it sound and feel? Can you hear and feel the difference?

Despite the efficiency of the leg stroke in playing single notes, it's not so well suited for playing double strokes, given that it's physically difficult to execute two leg strokes in the time and space available. In view of this, we can incorporate an additional technique - commonly known as the foot stroke.

The foot stroke, for the purpose of playing doubles, works in conjunction with the leg stroke, as follows: From the starting position (remind yourself with the image above), the heel is raised using the hopping action, and releases the beater (as in the leg stroke), but, instead of dropping back down, the ball of the foot plays the first note of the double from the ankle (foot stroke), the beater strikes the drum head and rebounds back to the dynamic level, then the second note of the double is played using the leg stroke, as described before.

It is very important, when using this technique, not to raise the heels too high before playing the foot stroke, as this will restrict the range, and power, of movement from the ankle.

Foot and leg strokes can be combined in a number of different ways - known as stroke sequences - to play common rhythmic phrases and multiple notes.

Alternating between foot and leg for multiple strokes is sometimes known as the rocking technique, and is used to great effect by many drummers. Notice that in all the examples given, the stroke sequence finishes on the leg stroke, which enables the leg to rest before the next stroke - this is very important.

Finally, it's important to mention that as the notes get even closer together, mechanical principles dictate that we have less time to physically operate the pedal, and, in this instance, we may have to incorporate other techniques.

One such technique is the slide technique which can be used for faster double strokes, as well as being incorporated into common phrases. In the slide technique, the heels are raised, again not too high (try to keep the foot parallel to the floor) and the notes are played by sliding, or gliding, the foot up and down the pedal footplate, as required.

This is a very useful and efficient technique; though remember to rest the foot and leg when you have finished the sequence.

Liked this? Then try:
Drum techniques: bass drum ergonomics
100 greatest drum beats of all time
The 17 most outrageous drum kits on the internet