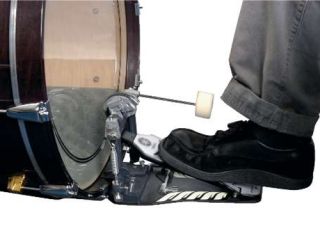 We've already nailed the Alexander Technique, we've looked at some of the physical motions used in foot techniques on the drumset and established that the position of the foot, on the respective pedals, is a key ergonomic consideration.

Now, we'll continue the theme and address a number of other physical and mechanical (ergonomic) variables relating to heel-up and heel-down techniques, with specific reference to the bass drum.

"Please release me, let me go…"

These words, sung beautifully by legendary crooner, and groove drummer, Englebert Humperdink, may have more meaning and relevance than you think.

In order to produce sound on the bass drum, we need to operate the pedal mechanism, which relies on a physical motion to 'release' the beater, followed by another motion to play the stroke and produce the required sound (dynamic). Now, this is not rocket science, but there are some mechanical principles that need to be considered.

In this position, we have already placed slight pressure to depress the footplate, and there is still enough space between the beater and the head to nudge the footplate down slightly further, before the actual release of the beater. This will allow for maximum momentum during the release process and subsequent playing of the stroke.

It is possible to initiate the release process with the beater placed firmly in the bass drum head and the above and below images show this, using heel-down and heel-up positions, respectively.

This will generate sufficient release and momentum, but starting (and finishing) the stroke in this position can have physical and sonic disadvantages, as we'll see next month.

Furthermore, if we begin the release process with the beater too far away from the head, as in the image below, it is difficult to generate full momentum, given that the beater has already been released to some degree. Ultimately, this will result in less speed, power, volume, and control.

The principle of the release process and dynamic levels, though reasonably simple in theory, can cause problems in practice. Regardless of the physical technique used, the volume and tone quality of a stroke played on the bass drum is determined by the principles of release (of the beater), dynamic levels (distance of the beater from the drumhead), anticipation (timing), velocity (speed) and acceleration (force).

What a palaver… all this just to hit the bass drum!

Nevertheless, it's important to create an awareness of this, and the best way is to experiment with some of the variables. So here we go. Try the following exercises, using a physical technique of your choice.

Throughout this exercise, you should play a regular rate of notes - let's say quarter notes at 70 bpm - to a click track or metronome, without stopping. Play as many bars as you want but remember to compare the feel and sound of each stroke throughout.

Be aware of how this feels physically (kinaesthetic), and how it sounds in terms of volume and tone. Be careful not to release further than the 60 degrees, for the purpose of the exercise.

2. Now release the beater with a faster physical action than before. This should not affect the rate of notes, nor should the beater release further than 60 degrees. Play the quarter notes and notice the change in physical feel, timing, volume and tone of the strokes.

There will be an increase in volume and difference in tone due to the increase in the momentum of the release, and the subsequent increase in force (acceleration) of the strokes.

3. Now play the strokes with a slower release action than point 1, again to 60 degrees, and at the same rate of notes. Notice again, the change in physical feel, timing, volume and tone of the strokes. There will be a decrease in volume and difference in tone quality. This will feel less physically natural.

These exercises, can, of course, have many variables, and you should experiment with playing strokes at different dynamic levels, for example, 30 degrees, 45 degrees, 60 degrees, 75 degrees and 90 degrees (see the image below), incorporating slow and fast release actions.

Ask yourself how it feels physically, and how it sounds in terms of volume and tone quality. Through experimentation and awareness of key concepts such as release, velocity, anticipation, momentum, acceleration and motion, you'll discover what does and doesn't work - mechanically, physically, sonically, and, above all, naturally.

The overriding principle is not to fight against the natural mechanics of the pedal (or the natural motions of the body).

There are significant differences in the physical motions of the respective heel-up and heel-down techniques, which naturally raises the question of whether one technique may be physically preferable to the other.

Drummers have long debated this question (oh how those long winter nights must fly by) and it's not an easy question to answer, though it's interesting to make some comparisons between the respective techniques.

Playing the pedal consistently in a heeldown position ensures greater surface area contact with the pedal footplate, which, arguably, provides more physical and dynamic control. Also, playing in this position provides a natural state of physical balance in both the upper and lower body, and, as such, is considered to be one of the virtues of the technique.

However, the heel-down position relies on a limited range of physical movement - that being the foot, with heel rested throughout, moving upwards to release the pedal board and beater, then moving back down to depress the pedal board, producing the sound.

From a physical point of view, this motion places a substantial workload on the smaller, more delicate shin muscles, which, if used exclusively and with speed and power, increases the risk of physical tension in this area.

On the other hand, heel-up techniques incorporate more use of the larger and stronger calf muscles which, when drumming, may generally be less prone to fatigue and tension.

Also, the limited range of movement in the heel-down technique is often compared with only being able to use the wrists (in hand techniques), rather than being able to use the whole of the arm, whereas heel-up techniques incorporate the use of all the lower-body joints. In view of this, it's often said that heel-up techniques provide more power and speed and are generally more versatile, as a result of the increased range of movement and physical variations in technique.

There is much to consider and the debate of the merits of heel-up or heel-down continues to rage. What do you think? Answers on a postcard (or in the comments below) please.

Liked this? Then try:
Drum techniques: lower body and foot
100 greatest drum beats of all time
The 17 most outrageous drum kits on the internet