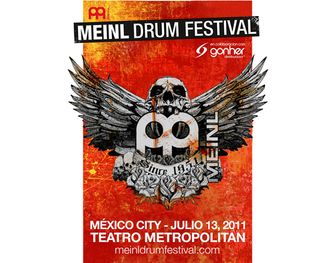 Dust off your sombrero and dig out your sun cream because Meinl has announced that its 2011 drum festival will be held in Mexico City.

Norbert Saemann, Meinl's festival organizer, said: "After the huge success of our first international Meinl Drum Festival in Moscow in 2009, it was just a matter of time until the second one was going to follow.

"After discussing this possibility with our Mexican distributor, we were confident that it could become another groundbreaking event. During my visit to Mexico City in September of this year and seeing the Teatro Metropolitan, I was positive that we will be able to accomplish something the Mexican drum community has never experienced before. I am really excited to turn this idea into reality and am ready to work very hard for the success of our second international Meinl Drum Festival."

Norbert also confirmed that he's currently working on bagging a host of top names for the show, and he'll have to go some way to top the bill at this year's Meinl Festival. Thomas Lang, Chris Coleman and Dave Mackintosh were among those that appeared at the German event back in June.

Take a look at www.meinldrumfestival.com for all of the latest.