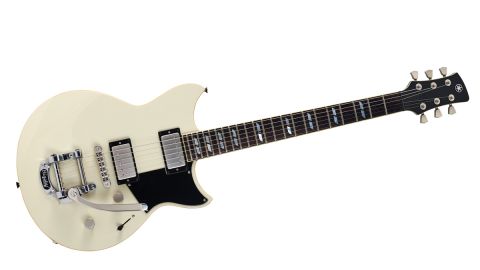 The Revstar guitar range was the result of the longest and most expensive development of any Yamaha electric ever and the company’s first new electric guitar design for over a decade.

At its launch, the eight-strong collection included a single Japanese-made ‘pro-level’ guitar, the P20CR. The remaining seven, from the start-up 320 to the top 820CR, were Indonesian-made with a price range spanning £320 to £790. Like everything else, prices have edged upwards since then, not least the upper-level models like the 820CR, which now retail at £995.

But since that 2016 launch, Yamaha hasn’t added to the range at all (aside from a couple of colour additions), and you wouldn’t be the first to wonder if the guitars had quietly disappeared. But, no, at this year’s NAMM Show we were finally treated to some new models, primarily the 720BX and 702B in Vintage White and Black respectively, which swap the original 720B’s Filter’Tron-style humbuckers for more standard humbuckers and soapbar single coils. There are two colour additions to the 820CR and two flame maple veneer-based colour options to the RS502T. What better time to reevaluate Revstar?

Whatever the level, all the models use the same 629mm (24.75-inch) scale length and feature the same slightly offset double-cut design with a rib-cage cutaway (from the 420 upwards) and a forearm contour (from the 502 and 502T upwards). There are echoes of Yamaha’s past designs in the Revstar: the outline isn’t a million miles away from the Super Fighter series or the classic SG series, which really put Yamaha on the electric guitar map. The headstock was inspired by Yamaha’s SA-15 from 1966.

The new Revstars share the same build, but any wood identification is near impossible to see - with the exception of the stained and sanded flame maple veneer of the most affordable 502TFMX. The glued-in three-piece mahogany neck joins the body at the 19th fret; its full width slots into the body with a foot extended some 34mm under the neck pickup. The necks and the back and sides of the mahogany bodies are hidden under a deep dark chocolate brown gloss finish that’s slightly translucent.

The thin 5mm-thick maple tops, all edge-bound with the same cream plastic, are where the colours alter in the gloss Vintage White and Black of the 720BX and the 702B, and the hand-brushed satin of the 502TFMX, while the 820CR’s top is mostly satin but with a couple of central gloss stripes. Each of the classy edge-bound headstocks is black-faced - gloss or satin to match the body’s face finish but not its colour.

Aside from the peel-off CE sticker on the back of the headstock, there is no Yamaha logo. The branding is simply that circular tuning fork logo badge on the headstock face, small lower-case ‘ygd’ (Yamaha Guitar Division) on the pickup covers, and on the rear of the headstock there’s a Japanese Hanko stamp-like decal that means ‘Revstar’. There’s no model ID, either.

The 720BX uses the VH5+ humbuckers that are also used on the 820CR and the 620. This level also swaps from the simple dot inlays of the others to the slightly rounded split parallelogram inlays, again inspired by Yamaha’s past: that 70s Super Fighter series.

This model and the 702B are the only new vibrato-loaded Revstar models and the licensed B50 is the obvious choice, along with its rear-locking tuners. However, the same brushed satin tune-o-matic as the non-vibrato models is used here, too, which might not have been the best choice, as we’ll see…

The body measures 44mm front to back, more like a Telecaster than a deeper Les Paul. There’s a very manageable, mainstream depth with all of the new Revstars at the 1st fret that averages out at just a shade under 21mm, and a nut width that averages 43.29mm - all with a uniform string spacing at the nut of 35.5mm thanks to the regimented black hard plastic Urea nuts. But this rather ordinary C profile feel in the lower positions flares out quite considerably into much older, classic Les Paul territory by the 12th fret where we have a pretty big-feeling C - but still nicely tapered in the shoulder - that is, on average, 25.35mm deep by the 12th and 53mm wide.

The slightly flatter-than-Gibson fingerboard radius sports some big ol’ frets, too, again pushing the Revstar into a rockier style: 2.84mm wide with a height of around 1.25mm to 1.3mm. Compare that with the fretwire Gibson uses on its current Les Pauls, which is approx. 2.28mm wide with a height just a shade over 1mm. As ever, these might seem like small differences, but your left hand really feels them. It all adds up to quite a specific feel.

This 700 guitar has Bigsby vibrato and the combination of new strings and a very new guitar can be unfriendly to any vibrato system, not least one of these. Certainly, out-of-the-box tuning stability is far from perfect here. String stretching is obviously very important, and special attention needs to be paid to both the nut and saddles. The former’s slots (with the exception of one G-string groove) are all fine, and with locking tuners the saddles come under scrutiny: they need some fettling, which is one reason why many brands rightly use a roller-saddle tune-o- matic. We wish Yamaha had, too.

When plugged in, the Bigsby-loaded 720BX isn’t as airy as we’d expect, almost as if it were an all-mahogany build with slightly more midrange girth. The Dry Switch’s bass-cut is relatively subtle, but pushes both in a clearer direction without the volume drop or hum pick-up of a humbucker-to- single-coil split and proves very effective to clean up both neck pickups without adding unnatural crispness. Both sound really good for less crunchy tones, especially on the pickup mix, too.

Reacquainting ourselves with Revstar reminds us that this is a well-sorted design that certainly leans on the Gibson side of the tone tracks with a surprisingly characterful feel. That said, within this very unified design, each of our review samples has a noticeably different voice, thanks to different pickups and bridge combinations.

As we describe, this model doesn’t hold its tuning perfectly, even after considerable string stretching, so unless you’re handy with your setup tools, we’d suggest swapping the bridge for a tune-o-matic with friction-reducing or roller saddles. Once sorted, however, and with similar sonic differences to the hardtail, it makes a rather fine retro-rocker. If we’re honest, though, that’s the only minor blip to be found in what is an extremely well-considered contemporary design.