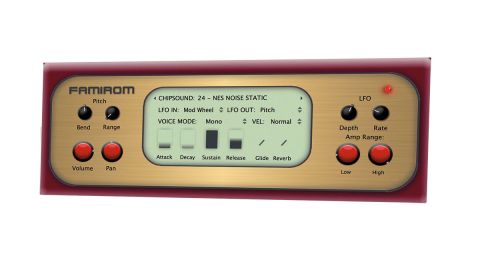 Like SMROM before it, Famirom is a must-have for lovers of classic chip sounds.

SampleScience's cheap and cheerful plugin synth draws on a bank of 60 waveforms (doubling the 30 of v1) sampled from a Nintendo Entertainment System, aka Famicom.

The timeless sounds of the NES' Ricoh 2A03 sound chip never lose their gritty, energetic charm, although there's no speed control for the modulated and arpeggiated ones, which rather hampers their usefulness unless the note pitch you need happens to modulate or arpeggiate at the right tempo.

The synth itself is very basic, offering nothing more than an ADSR amp envelope; an LFO for modulating pitch, amplitude or pan; poly, mono and legato modes, with Glide control for the last two; adjustable pitchbend range; High and Low Amp Range knobs for restricting the dynamic range and introducing distortion; and a reverb depth control.

It's enough to open Famirom's fabulous core sounds up to what feels like an appropriate degree of transformative tweaking for the price, but it's screaming out for the addition of LFO sync and an initialise button - we repeatedly felt the need for both.