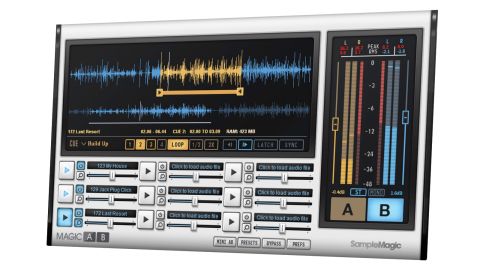 We're a bit surprised by the price rise since v1 (thankfully the upgrade is a very reasonable tenner), but Magic AB 2 still qualifies as an excellent, if not essential, studio solution.

Sample Magic's handy A/B comparison plugin impressed us on review a couple of years back and Version 2 (VST/AU/AAX) is an evolutionary step rather than a revolutionary one, stillserving the same purpose of taking the effort out of switching between the main output of your DAW and up to nine reference tracks.

There are two main new features, the first of which is the integration of three playback modes.

Now you can Sync Magic AB to the host DAW's timeline (ideal for comparing older versions of a project), lock it to the host DAW's transport or control it manually. Secondly, up to four cue and/or loop points can be set up in each reference track, each with its own name.

You can now drag tracks in directly from your OS and disable them to save on RAM; The output can be switched between mono and stereo; the 'Mini AB' option reduces the GUI but retains many controls; and zooming is now done using the mouse.