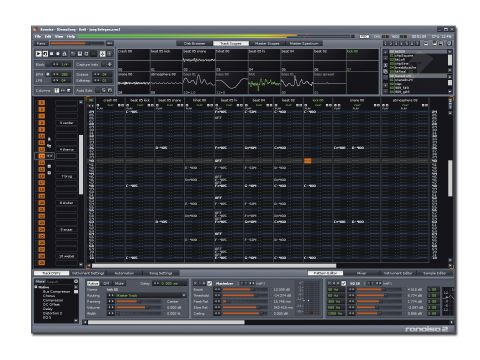 Whether you're an old hand or new to the world of trackers, Renoise 2.0 is probably the best one currently in existence.

Karsten Obarski's Ultimate SoundTracker sparked the tracker genre of music creation programs when it hit the Commodore Amiga in 1987.

It enabled users to sequence crusty 8-bit samples into complete tunes and, crucially, a song and its sounds were all stored in one file - known as a module - that could easily be utilised in games and demoscene productions, which is what made trackers so popular.

Modern trackers are a far cry from those of the Amiga days, but the fundamentals remain unchanged: notes, their attributes and commands are stored in vertical columns, with time running from top to bottom, as opposed to the horizontal approach of DAWs.

Due to the primarily alphanumeric representation of song data, patterns look more like spreadsheets than piano rolls and, indeed, the majority of editing is accomplished via the QWERTY keyboard, whether it's tapping in a melody, tweaking velocities or programming parameter changes.

This might sound laborious, but it's actually a very direct and efficient way to make music, and thus a very fast once you've got the commands under your fingers. Sequencing patterns is as simple as chaining them in order - there's no project timeline as such.

Renoise is an up-to-the-minute tracker, with modern, professional features like automation curves, a mixer with send channels, 21 native effects (including compression, distortion, chorus, reverb, delay, etc), MIDI support, an integrated sample editor, WAV rendering, and import of common file formats (including tracker modules such as XM, MOD and IT).

You can also load up VST/AU plug-ins, not to mention Linux LADSPA ones.

Still, Renoise 1.x was already the most professional tracker environment ever created and one of the most comprehensive, so what's been done to kick it up another notch?

First up is PDC (Plug-in Delay Compensation) for instruments and effects. PDC means that you need no longer worry if a VST or AU plug-in introduces unwanted latency, as Renoise will discreetly compensate for it in the background, just as most modern DAWs do.

Notes and commands in a tracker are always aligned to a vertical grid - 16th-notes by default. To achieve non-quantised timings, delay commands are used to make notes play back slightly late.

There's now a dedicated Delay Column, which enables you to offset notes with a precision equivalent to 256 divisions of one line in your song. Along with the improved MIDI recording precision, Delay Column values are also automatically recorded in if you're playing live, and you can fine-tune this behaviour with the new Note Quantize options.

As well as that, you can apply an overall Track Delay, specified in milliseconds, and there's a new Lines Per Beat parameter, replacing the musically illogical concept of Speed that was a hangover from older trackers.

LPB refers to the resolution of your song, with the default value giving four lines (rows) for each beat in the bar - 16th-note resolution, basically. Increasing LPB to eight will give 32nd-note resolution, while six equates to 16th note triplets, etc, with the line that falls on the beat always highlighted correctly. You can also change LPB on the fly to, say, drop in a sneaky triplet.

Mac users will be thrilled to hear that there's now AU support. Furthermore, multi-output VSTs and AUs can now route all their channels to individual tracks within Renoise.

There are many minor improvements, too, such as support for netbook resolutions down to 990x550, GUI streamlining, the dragging and dropping of song/sample files, an all-new Ringmod effect and a Filter 3 module with numerous modes, and various Pattern Editor tweaks to enhance workflow.

In fact, virtually no aspect of Renoise has been left untouched.

The best might be yet to come, however, as certain changes - notably the new LPB and Track Delays - are said to pave the way for intended future enhancements. Renoise reckons we can look forward to pattern zooms, a piano roll and more precise timing for effects automation. Fingers crossed, we'll see these implemented during the 2.x product cycle.

There are many pleasures to working in Renoise 2.0: the native plug-ins and their many presets cover a broad spectrum of audio production needs, automation is a breeze to use and, most of all, everything feels rock solid.

There's also a strong Renoise community and help is always at hand on its active forums (as are regular song compos).

Renoise has been truly cross-platform since v1.9.x, as it also runs under Linux. Compatible with Mac and PC hardware, this free, open source OS is renowned for its rock-solid stability and security.

Getting Renoise up and running is very easy, as it doesn't need to be compiled by the user - just download and decompress the file to a folder. You can start the Renoise executable directly, or install it system-wide by running the supplied install script as root from the terminal.

While the Quickstart Guide PDF doesn't contain any Linux-specific instructions, the online Linux tutorial covers everything from the basics through to advanced troubleshooting.

Version 2.0 of Renoise has a few new features of note to Linux users: as with OS X, audio performance is improved, with lower possible latencies when running on multi-CPU/core systems, and you can change the Periods/Buffer in the ALSA configuration.

As for plug-ins, Renoise supports both the Linux-native LADSPA format and Linux-native VSTs. Unfortunately, there aren't many of the latter available, so to use them under Linux, you'll have to install the dssi-vst adapter.

Many plug-ins work well with this, though certain features may be unavailable, and those that use dongles for copy-protection are a total no-go.

It's hard to find fault with Renoise 2.0, and the only issue that v1.x users might run into is that, upon importing old songs, they may need to "upgrade" them to the new format to take advantage of features like the improved timing model.

If you're new to the concept of trackers, then trying the very generous Renoise 2.0 demo will certainly make up your mind as to whether or not they're for you, as it's near fully-functional, with only ASIO support, WAV export and sampled content missing from the full thing.

So, no matter which OS you're running, there's really no excuse for not giving this fantastic music application a go.

Listen to some examples of what Renoise 2.0 can do: