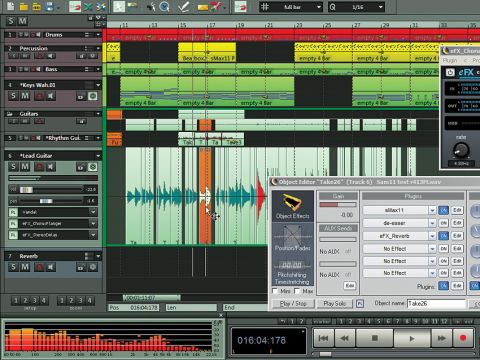 It doesn't feel as focused as some DAWs, but Samplitude remains strong in terms of power, flexibility and sound quality.

Samplitude is no newcomer to the great DAW race, having begun life in the early '90s as a sample editor for the good old Commodore Amiga. Its modern incarnation is a full-on DAW, offering recording, editing and playback of audio and MIDI; virtual instruments and effects; numerous graphic analysers; and much more.

We're looking at the Pro version here, which includes such extras as the Analog Modeling Suite, Vandal amp sim and Revolver tracks.

Samplitude's plug-ins have dramatically swelled in number, so let's take a look at what's new. The crash-happy Independence LE ROMpler from v10 is out, thank goodness, but the same workstation-style sounds are here in the Vita player, which we've seen before in Magix Music Maker. Vita is easy to use, offering controls for amplitude and filter envelopes, easy delay and reverb, etc. There's no multi-out, though, limiting the use of the drum kits.

Samplitude has new 'Synth Objects', which are clips that also contain the instrument itself. There are four instruments here and, again, we've seen them before in Music Maker.

Not impressing us much are the cheap and nasty LiViD virtual drummer and the cheesy Drum & Bass 'beats 'n' basslines' module that looks like a '90s eJay escapee. The Atmos 'atmosphere generator' is also present, complete with the hilarious hip hop mode, with its Gunfight parameter! Unsurprisingly, these Mickey Mouse efforts seem rather out of place in Samplitude.

"Workstation-style sounds are here in the Vita player, which we've seen before in Magix Music Maker."

BeatBox 2 is the fourth Synth Object instrument and is far more agreeable. It's a step-sequencing drum machine with shuffle, 14 effects, and neat automation lanes. Each of its 16 slots can trigger a sample, a synthesised drum or a mix thereof. There are three types of synthesis and some terrific noises can be had.

Sadly, there's no synth editing panel - instead, you assign a parameter to one of the six macro knobs, but with there being way more than six synth parameters, it's like performing keyhole synth surgery.

Also new is Revolta 2, a wicked soft synth that we felt was too full-on for Music Maker, but that suits Samplitude. It's got twin oscillators, noise generator, dual LFOs, step sequencer, mod matrix, dual effects and 150 or so presets. There are a few rough edges, though: it clicks on new notes if you exceed the voice limit, for instance.

Another of our favourites from Music Maker made the transition - Robota is another drum machine, with an emphasis on synthesis. Raw waveforms can be mashed up with frequency/ring modulation, rectification, bit-depth and sample-rate reduction, filtering (with a zingin' comb mode) and tube saturation/compression. Meaty kicks, speaker-shredding zaps, harsh dissonances and more are all fair game.

The essentialFX series is another Music Maker convert. StereoDelay Compressor, Phaser and Reverb can't compete with existing Samplitude plug-ins, but ChorusFlanger is a real gem, with its splendidly lush, shimmering chorus.

As for genuinely new plug-ins, the big one has to be the Vandal amp sim. It's de rigueur for today's DAWs to offer guitar and bass amp simulation, and this sees Magix following suit.

Operation is simple, with the main amp section offering gain and EQ knobs as well as a Voicing section that's like a parametric cut or boost. There's a choice of Classic, British and Modern amp styles (each with Clean, Crunch and Lead channels and Class A or Class AB power amp), as well as a bass amp.

The mic section enables you to select a speaker and enclosure, and position and mix two mics (there's a condenser and two dynamics). Stomp FX include four overdrives, chorus, phaser and wah wah. There's no compressor pedal, sadly, but there are two 'rack' effects on the output, with compression, delay, modulation and reverb, the latter being very sweet.

Sonically, Vandal really delivers, with everything from modern rectified growling distortions to glistening clean tones being adeptly handled. While you don't get zillions of models to toy with, there's definitely no lack of variety, and the slick, guitarist-friendly interface makes it easy to steer the tone as you wish.

Vandal will also be made available as a VST plug-in at the end of March, priced £150, and we'll be covering it in a dedicated review as soon as it's ready to rock.

Elsewhere, there's the sMax11 brickwall limiter, which has four modes, a release control and simple gain/ceiling sliders. It does a great job, although it's not on a par with the best third-party efforts.

There's a new EQ, too, called EQ116. It offers six bands, with high-/low-pass, peak and shelf for each; normal, oversampling and linear phase modes; an analyser; and a phase plot.

It's not all new plug-ins, of course. A key new feature is Revolver Tracks, enabling you to make alternate versions of any track's contents and flip between them at will. It's akin to A/B'ing presets on a plug-in, except you're switching between track contents instead, making it ideal for trying out arrangements, alternate edits, etc.

Also new are a velocity-manipulating MIDI tool/plug-in and a groove system. Grooves can be grabbed from MIDI, or from audio using the Audio Quantization Wizard which, as with v10, can be quite hit and miss (mainly the latter). While we're on the topic of quantisation, Samplitude finally has a button on the toolbar for changing the snap grid.

Further interface tweaks are a dockable interface system, a nicer skin and easy object/track colouring. You can browse for loops in the Manager and preview them in sync, too (but with certain audio modes, it was consistently off the beat - ouch).

"Perhaps instead of Samplitude 12, a Cubase SX-style 'reset and refresh' is in order."

A few instabilities reared their heads during our test sessions. The system would often freeze when saving projects using Vita with certain audio modes engaged, and also when enabling a laptop's onboard audio. Magix is aware of the issues, though, and are working to solve them.

As for downers, the biggest has to be the busy, fiddly GUI with its intimidating menus, endless options, irritating inconsistencies and odd omissions (proper transpose command, duplicate track function, etc). It'd be great if Magix overhauled the interface and plug-ins to give them all the pro look of am-track, Vandal, Revolta 2, etc. Perhaps instead of Samplitude 12, a Cubase SX-style 'reset and refresh' is in order.

Overall, this one feels like a slightly lazy update, what with the plethora of plug-ins appropriated from Music Maker. Yet for all its quirks, there's no denying that Samplitude remains a very powerful DAW.

Listen to a demo track created in Samplitude 11 Pro: