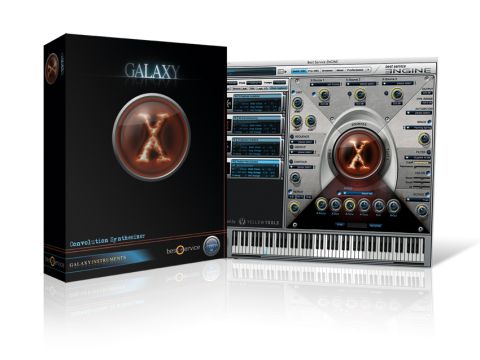 A massive realm of sound that throws up all manner of fabulous surprises.

Galaxy X is described as a convolution synthesiser, which is to say that it imposes the characteristics of one sample (an X-File) on one or more others (X-Sources).

The scale of the thing is bonkers. There are three separate instruments: Galaxy X-Keys, Galaxy X-FX and Galaxy X-Loops. They draw on over 16,000 samples to create around 1000 tonal patches, 2000+ sound effects and 5000+ loops between them. And that's just the sources - you also get 1400 X-Files, bringing the total weight up to 15GB.

The Engine player in which Galaxy X runs has been developed by soft sampling veterans Yellow Tools, and it's as powerful as it is drab (it's very drab). Source samples are fed through the Pre-X engine, which applies various effects, before reaching the X-Engine, which convolves them with the loaded X-File.

The impact of this depends on the characteristics of both - the X-file could have a filtering effect, or morphing, or reversing, or rhythmising, or texturising - it's a massive sound design playground! Further processing is then applied in the Engine Player's Pro Edit view, which is packed with effects and modulators.

The Keys and FX are cinematic, electro-organic and largely quite dark, while the loops cover a huge range of styles and grooves. There's so much that it can't be summed up in one review, and the exponentially expansive effect of the convolution processing pushes things beyond the finite anyway.

The convolution isn't always successful, with some sounds coming across as harsh and 'processed', but by and large, Galaxy X's sample-morphing concept works brilliantly.