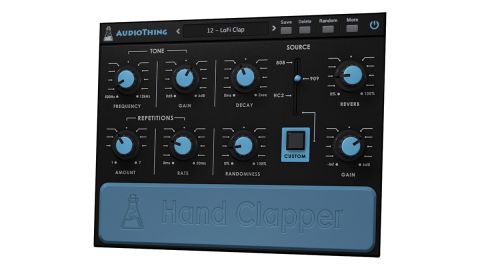 At this price, Hand Clapper is a winner.

Inspired by - and hugely improving on - the classic Boss HC-2 handclap module, the raison d'être of Hand Clapper (VST/AU/AAX) is the generating of handclaps.

Out of the box, as it were, it does its thing using a selection of three round-robin sample sets combined with filtered noise, emulating the Roland TR-808 and 909, and the HC-2 itself.

Rather splendidly, you can also load in a sample of your own (a single WAV up to four seconds long). Although claps and snares are the obvious candidates, we got all sorts of weird and wonderful results feeding it synth shots, vocals, pianos and the like.

A simple set of adjustable parameters enable shaping of the source signal. The Frequency and Gain knobs in the Tone section set the cutoff (500Hz-12kHz) and resonance (0-6dB) of a band-pass filter, while the all-important thickening of the clap is done in the Repetitions section, where the number of claps fired off in rapid succession (1-7) is established with the Amount knob, and the temporal spacing between them is dictated by Rate (0-30ms).

The duration of the final clap in the repetition sequence is governed by the Decay time (from 0ms to 2 seconds), and a user-specified degree of per-note chaos can be brought to bear on the filter and volume level with the Random dial.

Full randomisation of all parameters, meanwhile, is available via the Random button, which individual controls can be rendered immune to using the right-click Lock command (albeit without any visual indication as to what's locked and what's not). Basic ambience is on tap, too, in the shape of a plate reverb algorithm.

By default, Hand Clapper is fixed in both pitch and output level, no matter what the note numbers and velocities of the incoming MIDI notes. Activating the Tuned and/or Velocity modes, however, enables melodic and/or velocity-controlled play, should you feel like it's something you need.

You can also switch in a 0dB hard clipping limiter and render the current sound to a WAV file.

Obviously, Hand Clapper couldn't be easier to use, which makes it both productive and fun; but more importantly, it sounds truly wicked, perfectly capturing the spirits of the vintage machines at its heart. and doing crazy things to external samples.