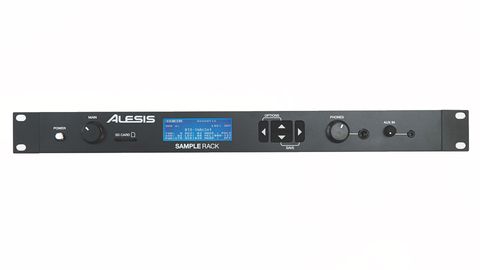 If you already own a set of triggers, the Samplerack is an all-round module for live and in the studio, with the added versatility of custom sample playback.

You might have spotted the Alesis SamplePad Pro on the site back in May; an eight-pad and -brain solution providing drum and percussion sounds, with the crucial bonus of being able to load samples from an SD card. Spare a few niggles, we loved it, and this time we're taking a look at its sibling, the Alesis Sample Rack.

Doing away with the 'hitty' parts of the SamplePad, the Sample Rack is a 19" rackmount version of the same concept. Its basic applications range from being an all-round studio drum module, trigger-to-MIDI converter, drum brain, and of course, the ability to load and play back custom samples. Let's get racking!

Around the back are eight trigger inputs, each capable of receiving a dual-zone trigger for head/rim (for example) triggering. As well as this, there are two inputs for kick and hi-hats, both of which can be switched for use with a footswitch, or in the case of the hi-hat, multi-positional hi-hat control.

There's also a main stereo output to send to your PA/monitoring, as well as headphones (offering a mirror of the L/R, rather than a separate headphone mix) and an auxiliary input for plugging in an audio player. The front panel consists of a screen, cursor buttons for navigating, and a pair of volume controls.

First impressions of the Sample Rack are a little underwhelming. Alesis has long been a trusted name when it comes to drum triggering, particularly in the metal community where its DM5 has offered a robust and affordable one-box way of triggering bass drums and snares in a live setting.

Problem is, the Sample Rack looks like it's stepped straight from 1995, rather than 2015. The metal chassis is going to be more than capable of taking a kicking around a stage, but we wouldn't expect the slightly wobbly plastic power switch and volume controls to remain attached for long.

It's also worth noting that our review model came with a European power supply, but no UK adaptor. Powered up, and the sounds are identical to the SamplePad Pro: solid enough for a practice kit and blending with acoustic sounds, but lacking the kind of detail our ears have become accustomed to from the myriad multi-layered sample libraries of 2015.

Our biggest problem with the Sample Rack is working out its target market. The SamplePad Pro offers a number of solutions - not least that it's a few hundred pounds cheaper than its nearest rival in the Roland SPD-SX.

The Sample Rack, however, has less of a USP. As a brain, its internal sounds are passable, but will never win in a studio setting against a computer-based sample pack.

It serves as a sturdy trigger-to-MIDI converter, although Alesis' own Trigger IO costs less. The main application, then, is arguably in utilising the sample function for live use.

However, we'd probably be looking in the direction of the smaller, more affordable and convenient (albeit less functional), Roland TM-2 for this type of application.

Overall, then, the Sample Rack is not a bad product, just missing an identity.