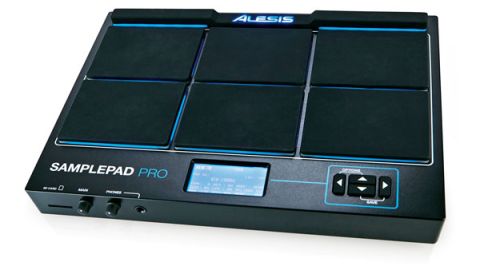 The SamplePad Pro is well priced and it keeps your sampling and triggering options open.

Alesis' previous SamplePad had four pads that were generously sized, but it instantly left you wanting more. Having doubled the pad count to eight, the Pro edition may look similar to the Roland SBX, but it comes in at half the price.

The name itself is slightly erroneous as SamplePad Pro doesn't sample direct; the onboard capacity is limited to around 200 sounds. Instead it reads samples loaded onto an SD card (max size 32GB).

Finished in the black with blue LED associated with Alesis, the unit looks neat and the layout is sensible with any dials removed from the playing surface. Instead they are located on the front and rear sides.

Alesis has actually made it a bit too clutter-free. The menu system would be easier to navigate with the inclusion of a Yes/No type button, or a Select/Exit set-up. Instead you have to hit two buttons at the same time and button sensitivity is such that you don't always do it correctly.

This minor annoyance aside, the menu is simple and requires no diving for selecting kits and swapping drum sounds. In fact, the only things you'll need to root around for are the settings, saving kits and loading samples onto the SD card.

Alesis has also bundled a free sample pack of hits and loops - or rather this is a free download from their website. Regardless, you are treated to nearly 500MB of sounds that are also used across Alesis' entire percussion range.

Loading new samples or loops onto the SamplePad is very easy. With the unit connected to the computer via USB you just need the SD card inserted and sample-load option selected; your SD card will appear as normal in your OS of choice.

All sounds need to be loaded onto the root of the card to be read. Once you're back on SamplePad, you will need to set the sample location to 'card' and you're all set.

The SamplePad Pro features extra trigger and pad inputs, so you can expand it with two extra pads, Kick and Hi-Hat triggers. There's also MIDI I/O, Aux in with volume control, and Footswitch input for system control.

What struck us after using the Pro for only a short while was how versatile it could be in a live situation. Connecting external gear is a doddle via MIDI; you'll just need to assign each pad to the MIDI channel of choice.

Using the extra pad and trigger inputs you can connect something like the EHX Clockworks to sequence some polyrhythms and still have the freedom to perform with the pads.

The playability of the pads is good enough, but doesn't feel as solid as the Roland or Yamaha alternatives and is quite hollow when hit with the stick, feedback being a little on the dead side. Pad sensitivity is tailored to a heavier playing style, but it's easy enough to adjust to suit your style.

Initially there was also some accidental re-triggering or 'crosstalk' between the shoulder pads and the adjacent pads at low velocities, but a firmware update seems to have rectified the situation.

SamplePad Pro offers a versatile solution for anyone looking to expand their creative output, be it as a live tool or in the studio. While its lightweight chassis may not stand up to the rigours of touring over time, its flexibility, simplicity and price make for a good all-round sampling tool.

If you see it more as an expressive sample player and controller, then it has much more to offer than just a beat machine.