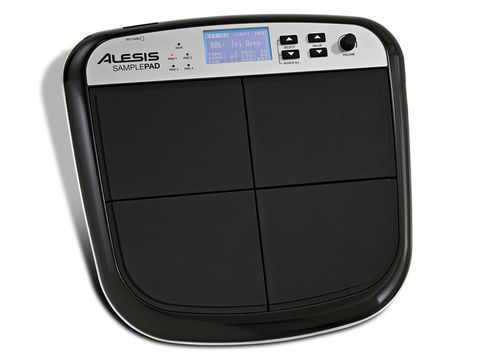 The potential is immense while the price isn't.

During the summer of 2011 Alesis unveiled its compact and highly affordable Percpad - an intuitive four-zone drum pad with onboard drum and percussion sounds, MIDI out and an additional trigger input.

Taking the basic concept a step further, Alesis has produced a similar-looking pad with all the above features - but, in addition, the new model has the ability to play user-created samples.

While the new pad is the same size as its Percpad predecessor, Alesis has embellished it with a tasteful chrome trim, shiny black casing and an LCD segment instead of the basic LED display. This shows a variety of information such as voice names (samples and internal), sound location (card or internal) and range of parameters affecting the control of any of the sounds including tuning, reverb, pan and volume.

Located well out of sticks' reach is one of the most significant, yet understated, additions - the SD card socket. While Alesis doesn't include an SD card with the Samplepad, one can be purchased for less than a fiver for a 4GB card.

As on the Percpad, there is a bank of LEDs that shows which pad is being struck, proving useful for assigning onboard sounds and samples.

We captured a selection of samples (voice, drums, snippets of music and sound effects), using basic PC sampling software and saved each of the 44.1K .wav files onto the 4GB card. Even with a stack of samples, there's still a load of space left for more.

With the card inserted, there is a slight pause while it checks the integrity. Then one of the first samples to load is a 'power chord' into PAD 1 (keeping the tuning as with the original sample); we put the same sample into PAD 2, altering the tuning. Though there are nine levels of tuning, this will enable an internal sound or sample to be taken up or down by around a third.

While a sample is sounding, the same sample (or an additional one) can be triggered again (and again!), creating an interesting wall of sound - a great effect with the power chord we'd created previously! Once played through the pad, the samples we load are virtually indistinguishable from the original, proving the pad's ability to faithfully reproduce the sounds.