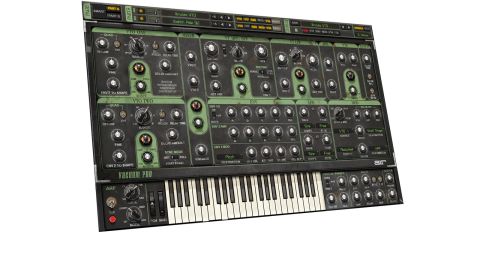 It lacks a little of Komplete's 'edge', but Advance is a nice concept and great value.

However, whereas NI draws entirely on its own range of digital content, Advance rounds up products from 17 brands, including Akai, Waves, FabFilter, FXpansion, D16, PSP, iZotope, Prime Loops and Air itself.

There's no denying that Advance is a great value package. At the time of writing, the UK street price has dropped to around £330, for which you get full versions of some 25 instruments, 15 effects and 15 sample packs. We haven't checked Air's claim that it totals up to $5,000 worth of software, but you don't need to get the calculator out to see that it's a substantial discount.

Inevitably, the quality of the software and sounds varies, but there's nothing you could describe as sub standard. While there isn't space here to go into everything, there are a number of highlights.

On the instrument front, FabFilter's Twin 2 is flexible and impressive, Air's Hybrid 3 has a huge sound and powerful sequencing capabilities, and Way Out Ware's TimewARP 2600, despite looking pretty dated, is an excellent emulation of a classic.

There are plenty of quality effects too, from creative tools such as iZotope Stutter Edit, D16's multiband distortion Devastor and the excellent FXpansion Bloom delay, to bread-and-butter tools including PSP's analogue inspired Retroq and MCQ, Waves Renaissance Channel - which is very dated but still impressive - and FabFilter's no-nonsense Simplon.

The sample packs are quality too, covering a broad range of genres and, crucially, there's enough to them so as not to just feel like promo packages aimed at getting you to part with more money.

As a whole, the package does feel a tiny bit dated. Of the instruments and effects mentioned above, Hybrid 3 is the only one to have been released in the past 18 months, and several first appeared over five years ago.

That doesn't detract from their quality or usability, and you get the latest versions of each, but the bundle could use a couple of bang-up-to-date 'headliners' to ramp up the desirability factor.

We were slightly disappointed by the lack of a single 'shell' for installation too. Having been a little spoilt by Komplete 10, it felt a hassle having to install and authorise everything (for the most part) individually, although this is an inevitable consequence of accessing software from a range of developers.

It lacks a little of the cutting-edge sheen and slick delivery of NI's offering, but the cross-company bundle concept is a winner and, even if you where to only take into account the small selection of plug-ins we've mentioned, this would still be a great value way to get some excellent software.

Check out the official Advance product site and reviews of individual plug-ins on MusicRadar for a more in-depth idea of what's included but, in short, this is a bargain waiting to be snapped up.