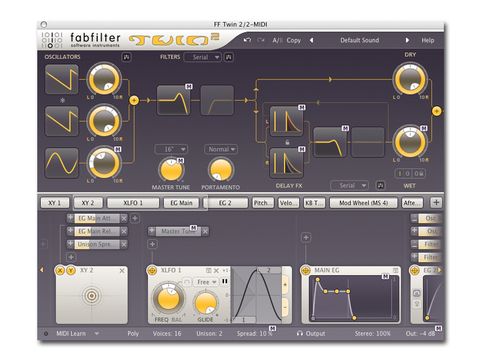 An excellent plug-in synth that's recommended to anyone with a love for classic analogue-style sounds.

The original FabFilter virtual analogue, One, had a great sound, but due to its single oscillator and general lack of sound-sculpting muscle, it had a hard time stacking up against the competition.

FabFilter Twin was a much more fleshed-out affair, with two oscillators, two filters with a variety of modes, and a clever modulation routing system that increased the creative possibilities immeasurably.

Twin 2 isn't the revolution that the original Twin was, but it offers an array of attractive new features.

Upon launching the synth for the first time, Twin veterans will immediately notice the rather impressive new interface. This employs the same scalable system as FabFilter's Volcano 2 dual filter, with such niceties as a 'what-you-use-is-what-you-see' GUI that hides anything not in the signal chain, and a scrolling modulation section where sources can be created as necessary.

While this 'dynamic' interface can seem a little baffling at first, once you've grasped the basics, it's no more or less complicated than that of any similar synth. Plus it means that, although Twin 2's interface is about the same size as the original version's, it's impressively up to the job of cramming in many more features.

Twin 2 stays true to the series' subtractive synthesis roots, so for the oscillators you have a choice of triangle, sawtooth, sine and square shapes, plus pink and white noise.

The square wave's pulse width can be adjusted with a dedicated control, and the oscillators have a Sync knob for creating hard-sync effects. Both of these controls can be modulated, and you can also set each generator to retrigger with every new note.

There's an extra oscillator, too, and the first two oscillators can now be used in ring modulation mode. These remain otherwise on the straightforward side, so the increased tonal possibilities afforded by the ring modulation are much appreciated.

The filter section comes directly after the generators in the signal chain. As with the original Twin, two self-resonating multimode filters are available, and can be configured in serial, parallel or per-oscillator mode. In the latter, the first two oscillators are routed to the respective filters, with the third routed to both.

There are 11 filter types available, which are instantly recognisable as those found in Volcano 2, and they live up to the FabFilter name, packing considerable sonic punch. Each type can be set to 12, 24 or 48dB roll-off and has its own Characteristic parameter. This last becomes particularly apparent when the resonance is turned up and the cutoff modulated, causing the filters to rumble and roar like a stressed-out grizzly bear.

In fact, the filters give Twin 2 the majority of its character. They have a round, rough, unpredictable quality that makes the synth feel more 'analogue' than your average soft synth. Oddly, it's not possible to adjust the volume level of each filter, but they can at least be panned.

Next in line is the delay section, which offers two units with time, feedback and cross-feedback controls for each. The delay times can be synced, and it's possible to set them to an 'ultra short' mode without feedback controls, for the purpose of phasing and other effects.

By modulating the delay time, chorusing and flanging effects can be created, too, and while this approach isn't quite as convenient as using a dedicated plug-in, it's a definite bonus for those who want to get their sounds as beefy as possible before resorting to additional processors; or, indeed, anyone who loves to get their sound-designing hands thoroughly dirty.

Like the oscillator and filter sections, the delay has a patch menu that enables you to save and reload the settings of that particular panel, or load one of the supplied presets. This is a great touch, but sadly this section only includes echo and delay presets - patches for an individual panel don't hold the corresponding modulation data, so it's not possible to save mod-based effects setups like choruses or flangers.

Speaking of which, Twin 2's modulation capabilities are absolutely excellent. Twin introduced an impressive system that enabled the user to directly route mod sources to parameters via drag and drop. The resulting connections would then appear in the modulation matrix at the centre of the screen, which was limited to eight routings.

Twin 2 uses the same system as FabFilter's Volcano 2, where the mod sources appear in a scrolling window at the bottom of the interface, enabling a greater number of them and their destinations. XY pads and envelopes can be created at will, and the synth uses the same so-called XLFOs featured in Volcano 2.

These extended LFOs can be used like 16-step sequencers, with the shape and curve of each step fully editable. Plus, you can fine-tune the phase of the LFO.

Other mod sources include MIDI parameters such as keynote and CCs, and an envelope follower, which is triggered via the synth's external sidechain input. This requires a DAW that enables audio to be routed to instruments.

In VST3-compatible hosts, Twin 2 can also be used as an FX instrument by adding it as an insert on the channel that you wish to take the sidechain input from, with the MIDI routed from another track.

As well as presets for individual panels, Twin 2 boasts a large library of full instrument patches - 1600 of them, in fact. These are divided into categories, and there's a Best Of folder so you can quickly get a taste of what the synth has to offer.

While it's a wide variety of sounds, the impatient may be underwhelmed, because they're not as immediately usable and inspirational as, for example, Sylenth1's presets.

Despite its slick interface and sophisticated modulation system, Twin 2 is relatively light on features. However, what it lacks in breadth, it makes up for in depth. The synth is great fun to program and play thanks to its superb sound and comprehensive modulation system, and in terms of pure sonic beef, it gives the renowned Sylenth1 a serious run for its money.

Twin 2 is one of the best virtual analogues we've heard thus far, and at this price point it's well worth the investment, even if you already have a subtractive synth that you're happy with.