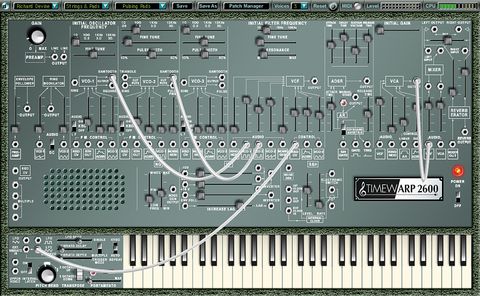 As close to an original ARP 2600 as you'll get in software - this is one of the best emulations there is.

The emulation of classic synthesizers in software was once the most exciting thing in music technology. As developers began to fully exploit the potential of the virtual instrument concept, a new generation of musicians could enjoy the amazing sounds of these old synths without having to pay through the nose for the original hardware.

As with many things, however, as more people got involved, the excitement wore off, and we've now seen so many emulations that everyone's becoming increasingly indifferent to new releases.

With so many developers around - including a rising number of individuals who are doing it for fun rather than profit - there are very few classics that haven't been 'remade'.

We've now got to the stage where so much of the past has been plundered that different companies are reproducing the same synths.

We've seen it with the Minimoog, and now we have another VST and AU version of the ARP 2600. Arturia may have already delivered the ARP 2600V, but Way Out Ware have done it again and reckon they've done it better (in fact, their RTAS version was actually out before Arturia's synth arrived).

The company's main boast is that with the TimewARP 2600 synth, they're alone in having the backing of Alan R. Pearlman - the original 2600's creator. So, has he backed the right synthesis-based horse with this one?

Installation is easy, though, as usual these days, you'll need to access the web to complete the authorisation of your software.

Auditioning sounds is also easy: the first menu has the soundbank (ranging from default or factory through to some that have been created by programmers like Robert Rich and Howard Scarr), while the second has the sound type (bass, lead, etc).

From here, you go to the third bank, where you choose a preset from the sound type you've selected. Simple - you can even use the arrow keys to step through the sounds.

Your first impression of the TimewARP 2600 - especially if you're used to fat and complex sounds from the likes of Absynth - may be a little lukewarm.

The bass patches, for example, sound quite simple when you first listen to them, but presets like Reso Tri Bass, which sounds fat and characterful and will shake your speakers, demonstrate the synth's strengths. The leads, too, can feel sparse, although they cut through most mixes as all good leads should.

It quickly becomes clear that the TimewARP 2600 is a very raw synth, but this is no bad thing. Way Out Ware have set out to create a pure ARP 2600 and that's what you get: nothing more, nothing less.

Having said that, getting the likes of Richard Devine in to program some sounds has really helped to push the envelope in terms of what the synth can do, and many of the effects are truly awesome.

Devine's Alien Textures bank has some wild presets - they don't just take you on a dark industrial journey, but also hark back to the good old days of cutting-edge synth music.

Many of the other 'programmer' banks also contain some very good emulations of 'real' instruments, and there are some nice strings and synth stabs too. Even the pads - so weak in the early banks - start to perk up a bit.

How does it compare?

So how does the TimewARP compare to the Arturia ARP 2600V? We put them literally side by side and have to say that they're quite different beasts.

The Arturia has a much more modern feel and features a bigger sound that's bolstered by a host of onboard effects.

TimewARP demands about twice as much power as the 2600V when it's running in Ableton Live, so you really have to be careful playing chords with some patches.

On the upside, it's £30 cheaper than Arturia's model, though we think that the best way to choose is to ask yourself if you want purity or sheen. In fact, die-hard ARP fans might even be tempted to buy both, as although these synths are based on exactly the same hardware, they actually sound quite different.

Ultimately, if you like the argument that says that virtual versions of classic synth emulations should retain the quirkiness and character of the hardware they emulate, Way Out Ware's ARP will almost certainly appeal to you.

With this version, the programmers have delivered a straightforward software emulation that doesn't mess with the original formula, and that's exactly what a lot of people will be looking for.