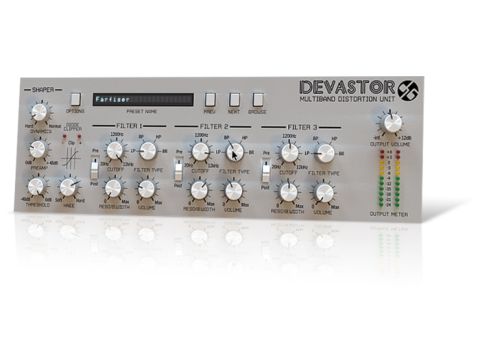 Devastor is a killer distortion plug-in, and much more exciting to use than it might seem on paper. At this price, what's stopping you?

Culled from (and improving upon) the distortion used in the company's TB-303 emulation, Phoscyon, Devastor is a cross-platform VST and AU effect plug-in that's capable of producing a vast range of distortion effects, from subtle clipping to ear-shredding assault.

Based on the sound that's produced by diode-clipping circuits, Devastor is a lot more than a simple fuzzbox. The distortion section is powerful in its own right, but it's only one part of a bigger whole. Devastor comprises a dynamics processor along with the clipper section itself, and wraps the lot in a trio of resonant multimode filters.

The dynamics section is serviced by a single knob that swings between Hard and Normal settings. Simple though this is, it does the job, keeping levels in check so they can be further processed, and it can really get drum beats slamming.

Next up is the diode clipper, which triples the knob count with its Preamp, Threshold and Knee controls. The Threshold determines the amplitude level above which the distortion should kick in. The Knee governs the character of the distortion - that is, whether it's a soft- or hard-clipping type.

Devastor's tone-shaping tools are not based upon EQ circuits, as some distortions are. Rather, they emulate analogue filters. There are three of them, each a multimode affair with resonance and cutoff controls. Low-pass, high-pass, band-pass and band-reject varieties are all provided, and a Pre/Post switch determines the position of each filter in the signal path.

This is a flexible arrangement and enables you to create unique sounds. The only criticism we can level here is that, despite Devastor being branded a multiband distortion, there's but a single clipping stage - a switch to enable a clipping stage for each filter could really be something!

We're telling it like it is when we say that Devastor sounds devilishly divine, if that isn't a contradiction in terms. It sounds (and looks) awesome just sitting there, but it really shines when you add a bit of MIDI control to the proceedings - MIDI learn is onboard, of course.

Not only that, but there's also a healthy selection of presets included, covering most common uses, from trashing drums to sweetening electric pianos. Needless to say, we tried them all on a wide variety of sources, and they never let us down. The distortion can scream, but doesn't exhibit some of the unpleasantly harsh qualities we've heard with many other clippers.

Take a listen to what Devastor can do: