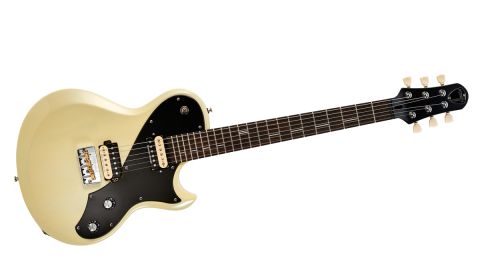 A classy guitar that covers an array of styles.

Bringing a far-from-classic brand such as Shergold back to market was always going to be an uphill struggle.

Slavishly recreating the original designs - which were, at best, functional - clearly wasn’t an option for any kind of modern mainstream success. And while the new-design Masqueraders have been doing rather nicely and certainly bring some serious quality and style to the market, some have dismissed the guitar as a rather ugly duckling. Who’d be a guitar designer in 2019, eh?

Enter the Provocateur, a new design that employs much of the style of the re-enlivened Masquerader but comes in (dare we say?) an easier-on-the-eye single-cut outline. Unlike the original four Masqueraders from 2017, we only have two Provocateurs, identical save for the pickup configuration with the SP01 sporting a P-90 at the neck and humbucker at the bridge, while the SP02 goes for a pair of ’buckers. Each is offered in three demure colours: Black and Dirty Blonde, which are both very slightly translucent, with black scratchplates, and the solid Battleship Grey, which has a vividly contrasting cream scratchplate.

This new design looks less like an adapted blast from the past yet it has a more than stylish retro-vibe. The mahogany body is 40mm thick and save for some light chambering around the top edges, it’s a relatively simple slab-body design. There’s no rear rib-cage contour and there is a little ‘student model’ about it that’s reflected in a slight downsizing, measuring approximately 325mm wide by 406mm long from the flattened base to the almost Telecaster-like shoulder. A Les Paul, for example, has a similar width, but its body is 30mm longer. Our Dirty Blonde model tips the scales at 2.91kg (6.4lb).

Another fundamental change is the scale length of the Provocateur, which drops down from the Masquerader’s Fender-style 648mm (25.5 inches) to a more Gibson-like 625mm (24.6 inches). While the original trio of Masqueraders featured bolt-on rosewood necks, the guitars launched just as the new CITES restrictions on the export and import of certain rosewoods came into force. The subsequent SM04 therefore went for a mahogany neck and that’s what is chosen here, although it’s classified as ‘torrefied’ on the spec sheet.

A 305mm (12-inch) fingerboard radius is retained, as are the relatively narrow/tall frets along with the aluminium line inlays to both the face and the side. As before, it’s a very tidy job and the attractively striped ebony fingerboard is actually edge bound with ebony binding creating a very neat job. And while a little more edge rolling to the fingerboard wouldn’t go amiss, the fret edges are extremely well rounded.

Both Shergold’s Masquerader and the Provocateur use four screws to hold the neck to the body; the former uses metal washer inserts to support the screws on a relieved heel area. Here, there’s a Shergold logo’d chromed metal neck plate with a slight curved corner on the treble side top edge to match the shoulder of the body as it curves towards the cutaway.

The lollipop three-a-side headstock - parallel to the face of the fingerboard like a Fender, not back-angled - is likewise retained, although its face here is black, as opposed to the natural neck colour of the Masquerader, which offsets that inlaid Shergold badge even more effectively. Another difference is the plastic tuner buttons that are keystone-shaped here and also colour dependent: the Black finish has black buttons; the Blonde and Grey’s are cream. As before, these are rear-lock tuners with staggered height posts, necessary to create enough rear angle for the D and G strings behind the well-cut black Tusq nut.

Unlike the Masquerader, which uses a similar style three-saddle bridge that differs depending on its humbucking or Tele-style bridge pickups, here, just the one type is used: a cut-off walled Tele-style bridge, with a choice of through-body or top string loading. As before and in keeping with Telecaster style, we have three compensated brass rod saddles. Seymour Duncan pickups are a big draw at this price and they’re controlled by a three-way toggle switch on the upper shoulder and a simple master volume and tone circuit, the latter with a pull/push switch to engage a coil-split on both. The bridge humbuckers are direct-mounted to the body, but along with the controls, both neck pickups are suspended on the scratchplate, which seems to draw its inspiration from a Tele Thinline-meets-Deluxe. It’s a more standard plastic ’plate, too, not Bakelite like the Masquerader.

The side-mounded jack on a rugged chromed metal plate is retained, too, and we get those very nice, if small, Japanese turned aluminium strap buttons that really are going to need a couple of Grolsch bottle-top rubber washers in order to keep your strap on.

The neck has a light red/ brown slightly open-pore-like thin satin sealer finish, and in terms of shape feels slightly more V’d than the Masquerader’s, and slightly deeper, too, with a depth that averages at just over 22mm at the 1st fret to a fuller 24.7mm by the 12th. It’s also slightly wider at just over 43mm at the nut, but really not by very much and it all fits with that shorter Gibson-like scale, feel-wise. Swapping between these new Provocateurs and our Masquerader SM04, they do feel more compact and definitely have more of a Gibson Jr/Special vibe.

The neat thing here, however, is the through-strung Tele-like bridge where you might expect a wrapover. Aside from the difference in feel that it brings, it seems to help to produce a highly vibrant, bright-edged acoustic resonance.

The uncovered zebra-bobbined ’59s on the SP02 sit very well on the platform, a vintage-y ’bucker voice with quite a modern clarity. The mix is especially good, particularly with some denser effects. Straight into your amp, it might be a little too clear for older styles and the coil-splits do sound  a little thin and stringy, not least that the very effective treble bleed keeps the highs virtually untouched as you turn the volume down.

While no-one is pretending this is a UK-made guitar, it retains some of the quirky original Shergold DNA that’s been tastefully distilled by Patrick Eggle and the new Shergold team into a design that seems very current. This is very nicely made with plenty of retro-y, vintage vibe, and it’d be a perfect gigging tool whether you’re ‘on stage’ at your local boozer or higher up the food chain.

Yes, the voicing of the SP02 with its ubiquitous Duncan ’59s does sound a little generic, but it covers a lot of styles with ease. This is a classy guitar with an eye on budget that feel, play and sound anything but.