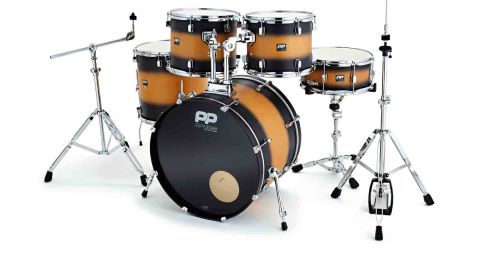 It's good to see PP thinking out of the box with one of the more lavish finishes. However, comparing value with other budget kits (even its own PP300R), we think they may need to sharpen their pencil.

A set of Chinese-made drums aimed at the budding basher is up for review this month from JHS's popular Performance Percussion brand, specialising in starter drums and educational percussion. This comprehensive selection includes a range of colourful percussion sets for juniors up to complete kits for the more mature player.

Though this selection is minimal, it is nevertheless impressive with a set of sturdy double-braced stands for hi-hat, snare drum and one cymbal, L-arm tom brackets and a hefty chain-drive kick pedal.

Other notable features include nylon bushing on each stand upright, bass drum-mounted tom holder and rack toms. The tom arms are fully adjustable for any feasible playable angle and benefit from memory locks to maintain tom position for each and every set-up.

In the JHS PP catalogue, the Black Velvet specification includes a side-tightening clamp of the kick pedal but, oddly, the model sent for review has this located under the pedal footplate.

Rather than the usual conservative selection of black, red or blue finishes found on many starter kits, this set has a black-to-natural-wood fade. This is created by bands of matt black sprayed at the top and bottom portions of the shell exteriors, leaving a central band of the finely grained wood which, says PP, has a satin finish. This does look quite enticing in the PP catalogue, however, in the 'flesh' the overall effect, we feel, appears dull.

Much of the engineering here (including lugs, tuning bolts etc), is to an acceptable standard. However, the least impressive piece is the snare drum throw-off lever. This has been shaped from pressed steel and feels extremely rough to the touch and quite honestly looks like the subject of a failed metalwork project - simply put, it feels cheap and nasty.

With the exception of the pre-fitted heads of the snare, the others have to be fitted on the rest of the kit. First up it's the toms where the only slightly worrying aspect is that the floor tom has only six lugs per head - eight would have been preferable for a drum of this size. It takes some careful and diligent tuning methods but each tom produces a deep but wide open and acceptable tone.

These Chinese-made Remos can and do sound equally as good as their USA counterparts but we find they have tendency to dent rapidly so they don't hold their tone quite as well, ageing them prematurely.

The 22" kick has the usual Clear for the batter which, fortunately, comes with an inbuilt dampening strip. The tension of this head is taken up so the wrinkles begin to disappear.

With the front head in position, it is tensioned just past those wrinkles and given yet another half a turn more where the sound is thick but lacks the low-end thump we're after. The pre-cut mic port of the ebony front proves useful for adding a small pillow which sufficiently damps it to produce a hefty thump.

We're hoping the snare will come good once we have had chance to play around with it. Even though the tension is not anywhere as high as our usual gigging standard, there is very little of the counter hoop protruding above the head.

Lowering the tuning simply slackens off the head too much and the drum becomes unplayable. Cranking up the snare more doesn't improve the sound significantly and leaves the counter hoop protruding a few millimetres above the bearing edge which could expose it to stick strikes.

The throw-off protests with a bump and a grind before the 20-strand snare clomps into position - even then, the wires are not evenly tensioned. The snare sound isn't right - with the snare strainer tightened, so each wire is in contact with the head, it simply chokes the drum. With its portly proportions, we would have expected this wooden model to be quite the little powerhouse but we remain disappointed.