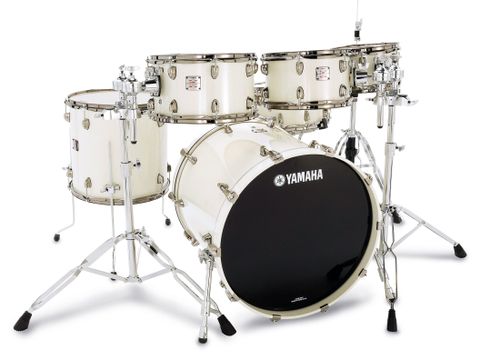 Yamaha has reacted to trends and produced a bang-up-to-the-minute kit in the shape of the Oak X. It has done so on a small and relatively low-risk scale and, in the process, has showed admirable faith in its people on the ground in the UK. The fact that most of the first run of Oak X kits have been sold already speaks volumes.

You'd probably expect a company the size of Yamaha to operate on a global scale, devising identical products to be sent all over the world. Any limited production runs, you might assume, would be restricted to large territories such as America. You'd be wrong though.

The proof is in the Oak X, a limited edition kit that has been conceived and launched by Yamaha Drums UK. As a new variant of the company's celebrated Oak Custom series, the Oak X brings a real dose of punk attitude/urban cool to this most English-sounding of woods.

Since introducing its Oak Custom range five years ago Yamaha has remained largely alone in producing oak drums. This is because while oak is a hard wood, it is brittle and so is not the easiest material with which to make drums.

Yamaha's air seal system circumvents this difficulty, enabling Yamaha to create oak drums without wasting time and materials in the process. The results so far have wowed many drummers, with oak's character delivering a punchy, aggressive sound that really distinguishes it from the usual drum staples such as maple and birch.

Unique sound qualities aside, until now Oak Custom drums have been relatively sober in appearance. This new Oak X kit dispenses with any notions of restraint and goes all out for the young hip stickster.

The drums are available in two lacquer finishes; White Sparkle as featured on the review kit and Dark black Sparkle along with Yamaha's high-end ranges the drums are manufactured in Japan. The shells are made from north Japanese oak and are arranged into three different ply thicknesses according to the type of drum: six plies for toms, seven for the bass drum and eight for the snare.

Internally, the shells have been sanded and lightly sealed. Oak has a distinctive grain and there is a visible greenish tinge (more noticeable on some drums than others) to the warm hues. Bearing edges are cut sharply at 45 degrees with a short back-cut to the outer shell.

The lugs are regular Oak Custom models that are coated in dark chrome. Rubber gaskets separate the lugs from the shell at point of contact on all drums except the snare. This is presumably because, although it is finished in the matching exclusive lacquer, the snare has been sourced from another Yamaha range. This would also explain the slightly chunkier style of lug fitted, and the fact that they are offset rather than in-line like the rest of the kit.

The hoops share the same dark chrome coating as the lugs, lending a subtle but unmistakably cool look that complements the lacquer finish. A new Oak X badge has been devised for the kit and it too sits on a background of dark chrome.

The tension rods are a normal steel colour as well, but they remain fairly inconspicuous.

Considering the price and aspirations of the kit we were surprised to find very plain bass drum claws with no rubber lining to protect the hoop and the shallowest of recesses. It's difficult to think of any other kit at this price point with such basic examples fitted.

The fashion for super-long bass drums is well established, but their use is not without complications. In our experience the biggest headache is carting one around. Without even resorting to the extra width of a case we were only just able to negotiate normal doorways and still came away with bashed knuckles.

Such a long and undrilled drum required intervention to get the best out of it. Without it the drum was loud but understandably prone to boominess.

Cutting a port in the front head made the biggest impact. There is a huge volume of air within the drum with only a single air vent to escape from when hit. With the port cut the pressure was released and a minimum of dampening was needed to elicit a satisfyingly low and assertive response.

It possessed a hard, middle-rich note that sat up in the mix and cut across the backline on stage. While it's a big drum with a big voice, it didn't overwhelm the kit in the manner that its dimensions might suggest. Tuning it up didn't suit it; it excelled with the heads slung low.

The toms, with their inversely short proportions, were quick, punchy and fat. Toms this shallow give an instant response and their minimal overtones mean that they mic up well. They were a doddle to tune and their useful range was impressive. With the heads taut they were clean and resonant, while slackened off they showed a more robust side.

The 14"x8" tom was particularly pleasing, to the extent that we now have some insight into why Keith Moon had three toms of this size. In comparison, the floor tom had a slightly fuller note, but being shorter than a regularly-sized floor tom it was still as fast as the toms.

The snare was identical in build to the one reviewed by Jake Stacey in November 2008's issue of rhythm. I can only agree with his observations, as it combined unquestionable authority with great versatility.