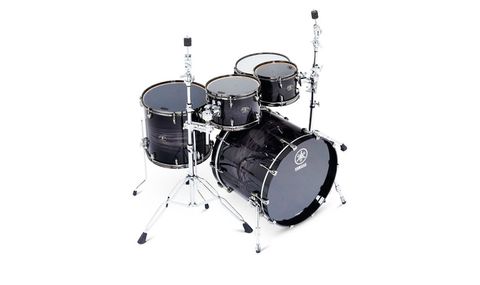 Built with Yamaha's usual attention to detail, the Live Custom is a powerful new addition to the market.

Yamaha was the first manufacturer to produce oak-shelled drums in volume, introducing the Yamaha Oak Custom series over a decade ago. Prior to this, oak was more often used as a component rather than sole wood. The new Live Custom series replaces Yamaha's outgoing Oak Custom range, with the emphasis being on drums particularly suited to live scenarios.

Live Custom kits are made in Yamaha's Chinese Xiao-Shan factory which first opened in 1997 and to date has produced pianos, woodwind and marching and orchestral percussion. In order to facilitate drum production, Yamaha has invested heavily in the site, installing its air-seal manufacturing systems.

This technology is essential as, while oak is ideal in many respects for drumbuilding (it's extremely hard), at the same time it is not the easiest of materials to work with. The oak used is sourced from China and is the same wood that went into Oak Custom kits.

The review kit is made up from a 22"x18" bass drum, 14"x51⁄2" snare, 10"x7" and 12"x8" toms and a 16"x15" floor tom. Rather than offering off-the-shelf shellpacks, Yamaha is marketing the kit as a series of bundles which can be mixed and matched to your specification. In the case of the review kit, the bass drum and snare drum are chosen individually while the two toms and floor tom come as a set.

The most immediate difference between Oak Custom and Live Custom drums is slightly thicker shells, with individual ply thickness being beefed up by 10 percent to 1.2mm. The ply count for the toms and snares remains the same (six) but the cumulative effect of each layer results in altogether fatter shells at 7.2mm.

Meanwhile bass drums are eight plies thick (one extra compared with Oak Custom), coming in at a hefty 9.6mm. Bearing edges are cut at 45° with a rounded peak and a minimal backcut to the outer edge of the drum.

The changes aren't limited to the shell construction, with the lugs being upgraded to Absolute models. A lesson in elegant simplicity, Absolute lugs are attached to the shell by a single bolt, making them genuine low mass components.

Like all the shell hardware, the lugs have been nickel plated with a smoked finish (described as dark silver by Yamaha), giving the drums a sharp look from the off. This is magnified on the review kit by its glossy Black Shadow Sunburst lacquer finish - inevitably it draws comparisons with Spinal Tap's replacement cover art for the band's legendary Smell The Glove album ('How much more black could this be?')...

Sitting behind the kit doesn't dilute the effect as the interiors of the shells have been coated with matt black sealer; other than the white head of the snare drum, the player's view is of a series of completely black cylinders.

Interestingly, the sealer's inclusion is purely for appearances rather than any influence it might have on the drums' sound. Three alternative lacquer finishes are available (with one of them being another variation of black) - whichever outer colour you plump for the inside of the shells remains black.

Stout 2.3mm Dyna Hoops (also dark silver) are fitted to the snare and toms. Yamaha has found that such a strong hoop works best in encouraging the oak's response whilst offering excellent tuning stability.

The positioning of the vent holes mirrors the designs first introduced on Yamaha's flagship PHX Phoenix series. For the snare this is bang in the middle of the shell, while the vents on the toms and floor toms are all located just over an inch above the resonant head. The bass drum's vent is close to the batter head.

Also found on the bass drum are new die-cast lug hooks which feature a neat curved recess around the tuning rod, and new PHX-style spurs. An improved design of tom-mount base is found on Live Custom bass drums as well, though not the review model which is an undrilled R version.

Other hardware components designed exclusively for this series include the snare throw-off and butt-end and floor tom leg clamps.

Previous encounters with Yamaha's Oak Custom drums left us with a good idea of what to expect from this kit. Oak has its own sound - punchy, clean yet with discernible warmth as well. Of course, Live Custom shells are thicker than their predecessors, which would suggest less sensitivity but more projection.

The toms immediately tick the box marked 'powerful', combining full-on attack with a fat note. Hitting the 10" tom first we were taken aback, as at medium and lower tunings the sound it produces is akin to that of a larger drum. Progressing around the toms to the floor tom finds the 'oomph' factor increasing with each diameter.

Twin-ply Emperor heads are fitted across the toms and these help accentuate the depth of frequencies while ensuring decay is rapid. The cleanness of oak shines through with the toms leaving their mark all over the mix at will. We also found them laughably easy to tune, which can only be a good sign.

Turning to the bass drum we tried it initially with the front head intact (ie: unported), expecting it to explode with rumbling overtones. Surprisingly this wasn't the case - it sounded big and deep but unusually controlled.

Cutting a port in the front head loosened the sound a little but it remained punchy, concise and very useable - there is no shortage of low-end in the fundamental note but the lack of any meaningful overtones, even when wide open, is unexpected, but welcome.

Miking it up at a gig required minimal intervention from the sound engineer. Yamaha make the same diameter drum in two shorter lengths - 16" and 14". We imagine the 14" model in particular would suit oak's characteristics perfectly, making for a superbly responsive drum.

The 14"x51⁄2" snare - currently the only Live Custom snare drum available - is impressively versatile. Sounding deeper than its 51⁄2", it crunches backbeats when tuned lower and snaps like an angry dog at the other end of the scale. Wherever the tuning is pitched it manages to keep its authority.

A full spread of sensitivity is possible, with the snare wires still buzzing when the sticks are right into the edges. Cross-sticking comes through sharp and clear while rim-shots burst with metallic energy. All the while the 2.3mm Dyna Hoops hold steady.

Overall, the Live Custom is a powerful new addition to the market. The thickness of the shells and overall look of the kit would suggest it's aimed more at younger, hard-hitting players but oak's unique qualities should appeal to a broader range of drummers.