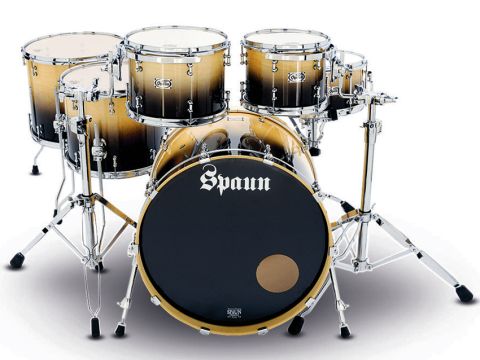 For a custom drum-maker, moving into more affordable pastures is a tricky manoeuvre to pull off without diminishing the brand's core qualities and reputation. The TL kit succeeds because it feels and sounds every inch a Spaun set of drums - the design, attention to detail and performance is unmistakable.

Since its inception in 1996, Spaun has been a strictly custom drum manufacturer. In that time it has brought some memorably original designs and extroverted ﬁnishes to the market. The new TL Series is the Californian company's ﬁrst project away from high-end drums and takes the brand into more affordable, production-style drum kits.

Before you start contemplating swapping your £600 set for a Spaun kit, it is worth noting that the drums on review top two grand with the snare included. While this places the kit unambiguously in pro territory, it does represent a huge saving of around 40 percent on the price of an equivalent custom Spaun kit.

Wherever possible the speciﬁcations of the TL kit mirror (or get close to) those on custom Spaun drums.

This pricing differential becomes more relevant in light of the knowledge that the TL shells are, in fact, made by DW. This doesn't make the TL kit a rebadged DW, however, as Spaun has its own drum-making philosophy and has worked closely with DW to ensure that the shells are made to exacting speciﬁcations. If anything it illuminates how small the drum world is.

TL series shells share exactly the same qualities and proportions as premium Spaun drums; they are 8-ply maple and are a super-thin 5.5mm thick across the kit. Spaun believes that keeping the shell thickness constant gives a wider tuning range and more consistent voicing.

Similarly, it is adamant that reinforcement rings affect a drum's sound to its detriment and so doesn't ﬁt them (with the obvious exception of its Edgevent kit).

The bearing edges are cut in Spaun's trademark double 45 degree shape. As both sides of the edge are cut symmetrically, the point of head contact is moved fractionally towards the inside of the shell. This means that the head aligns with the drum on a ﬂat area rather than its collar, allowing it to seat properly.

The vintage-style tube lugs which the series is named after are machined from solid brass before being chrome plated. Each lug has a single point of contact and they are ﬁtted in a ratio of two lugs per tension rod (joined by a short length of tubing) across the drums. The snare drum is the exception to this rule as single lugs at the batter and resonant end are linked by longer lengths of tubing, creating full-length lugs.

Spaun has opted for 2mm triple ﬂanged hoops rather than the 2.3mm hoops found on custom Spaun drums. The TL Series hoops are still substantial, however, and ﬁt the drums snugly. Spaun's own design suspension mounts are ﬁtted as standard to the toms. These, along with the supplied ﬂoor tom legs, are exactly the same models found on high-end Spaun drums.

In terms of components, the TL drums are not hugely different to more expensive Spaun offerings. The savings are accrued through the minimal choices available across the range. Numbers and sizes of individual drums are restricted to a single bass drum model, two snare drums, two toms and two ﬂoor toms.

The selection of ﬁnishes is limited to two lacquers and three wraps. The Blonde To Black Fade that adorns the review kit is as good a quality lacquer ﬁnish as you'll ﬁnd, but by Spaun standards is relatively subdued. A dark red alternative called Tobacco Burst is equally attractive, but again is not quite the customary Spaun show-stopping statement.

The trio of wrap ﬁnishes are based around single colours, Flat Black, Red Sparkle and Silver Sparkle, with the two sparkles being naturally the liveliest looking. Choosing a wrap ﬁnish over a kit this size would reduce the price by less than a hundred pounds.

Spaun has a long-established partnership with Evans heads and TL Series drums are ﬁtted with identical heads to those on Spaun Custom, Recording and Exotic kits. Bearing in mind how fundamental the choice of head is to a drum's sound, this is a crucial detail and one that Spaun has got spot on. In setting the kit up we found the drums only required small - if any - amounts of ﬁne tuning.

The bass drum punches through with a deep and urgent response. At its core is an implacable hardness that keeps it focused and taut. Current trends being what they are, we're accustomed to bass drums producing huge amounts of low frequencies but less in the way of deﬁnition, so to hear a drum with so much immediate presence makes a pleasant change.

Removing the EMAD dampening ring loosened the drum's sound a little, but it remained reluctant to stray far into 'boom' territory.

At 6 1/2" deep the snare has the power to match the bass drum dynamically, delivering an aggressive crack. It's a naturally authoritative drum that works well through a range of tunings. The inﬂuence of the extra depth is most noticeable when cranking the tuning up. Instead of tightening into a thin, snappy sound, it retains a noticeable full-bodied 'oomph' - despite the highness of the note.

The toms and ﬂoor toms are evenly spaced in diameters, with the ﬂoor toms also being appropriately shorter to reﬂect the toms' modest depth. The ﬁtted twin-ply G2 heads come to the fore, ensuring a superb response across all four drums.

There is a good degree of attack present that allows the toms to cut through. At the same time each drum is drenched in warmth. The balance of saturation and sustain achieved is hard to resist - as, many bouts of overplaying later, we were forced to concede.