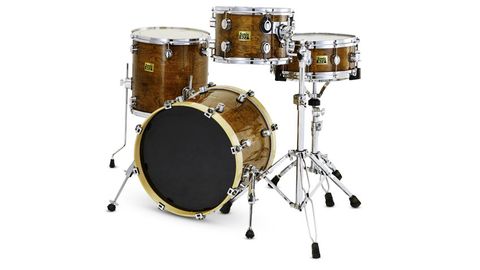 Though the heads are mediocre, the Sonix 922 Jazz Kit does sound good, but change to perimeter dampening type heads on the bass drum and some coated heads on the toms and this could actually be tempting as a second kit for those smaller gigs.

Percussion Plus will be familiar as distributors of Impression cymbals as well as producers of wallet-friendly percussion, Sonix entry-level drum kits and a range of drum accessories. Though a large proportion of their products are targeted at the student player, PP has moved into the intermediate arena with their Sonix 922 series kits.

The Sonix 922 Jazz kit builds on the success of the original entry-level Sonix series. This mid-range model is quite obviously targeted towards jazzers but, due to its compact size, will appeal to drummers who crave something a little more convenient to take to gigs.

The drum specification looks impressive with 100 percent birch shells, die-cast hoops on the snare, undrilled bass drum and isolated suspended tom mount. All of the drums in this shell-pack feature stout oval lugs, sporting a domed convex front. The chrome lugs and other metal work attached to the shells are isolated by rubber gaskets.

The RIMS-type mount for the suspended tom has a 'T'-shaped bracket with the top of the 'T' shared between two lugs attached by rubber grommets while the lower part is firmly bolted to the shell. A single clamp onto the 'T' slots over the top of the provided multi-clamp mount for securing to a cymbal stand.

The floor tom brackets have a similar clamp design to the suspended tom and appear to be substantial and well-engineered. At a cursory glance the snare has all the right elements you'd expect from a mid-range drum: solid side-lever throw-off, fixed butt-end with tension bolt fixings for strainer straps and die-cast hoops.

Unfortunately the die-casting is not the smoothest we have seen and the underside is quite sharp to the touch. The 'casings' of the bass drum spurs are also die-cast (but appear better finished than the snare), and each of the legs has a fat rubber foot and a retractable spike.

To the side of each fold-out spur is a gauge built in to the metal so that both legs can be measured to the same length for a speedy repeat set up.

It is good to find the bass drum undrilled and a set of recessed tuning bolts too which make this a compact and neat little kick. The natural finish hoops ensure that it blends with the rest of the kit and is also used with the White Natural Pearl of the other finish option.

Though we are not reviewing the hardware itself, it's worth mentioning the option of 922 series hardware including snare stand, boom stands, hi-hat stand, throne, bass drum pedal etc.

The stands each have nylon inserts wherever there is moving metal-to-metal contact and the bass drum pedal has some worthy features such as dual chain drive, large foot plate with toe stop and a dual-sided beater.

We took the kit along to a couple of small, intimate pub venues where the band was playing a mixture of jazz, laid-back rock and memorable fun stuff by Paloma Faith, Caro Emerald and Imelda May. This reviewer's usual gigging kit has a 22" kick so it was weird setting up the little 18" where the suspended tom seemed to be so high above it.

With both toms slightly detuned from the over-exuberant factory tension, the 14" floor tom is just about perfect even with the Chinese-made Remo Pinstripes. The suspended tom didn't like the notion of a reduced tension and began to lose its sustain.

As there is no dampening in the bass drum, a dampening strip had to be laid across the lower part of the batter which proved just enough to cut down on the overtones and still give it a bit of body.

Soon we warmed to the sizes and enjoyed playing the kit especially when it came to songs like 'Johnny Got A Boom Boom' where the floor tom held its heads up high with plenty of body, and striking the snare across the head and rim produced some notable, head-turning rim-shots.