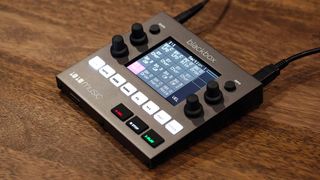 Electronic musicians know that there’s more than one way to skin the rhythmic cat, but using a drum machine is undeniably one of the most satisfying.

Equally, while you can do your sampling in software, getting hands-on with a dedicated hardware box can take you down hitherto unexplored creative avenues.

When you were voting fort the best new music tech gear of 2019, drum machines and samplers had to come into the equation. Here's what your hive mind concluded, starting with our surprise winner...

Originally surfacing at Synthplex back in April, this diminutive sampler enables you to record, save/load, apply effects and edit one-shot samples and beat-sliced loops, all with the aid of the touchscreen interface.

Sequences can be created with samples by tapping the pads, playing a virtual keyboard, using external MIDI controllers, or by drawing-in notes using the piano roll editor.  Once created, those sequences can be used in song sections so that you can build entire compositions, and you’re also afforded the option to add stereo effects.

The unit is housed in a rugged metal enclosure, so can handle being thrown in a bag for live shows, and it also comes bundled with plenty of sample pack content, courtesy of SoundTrack Loops and Loopmasters.

Behringer's controversial 808 clone is now available in the wild, after a typically well-orchestrated pre-release kerfuffle. This is an analogue drum machine with individual outputs for each of its 16 sounds. There’s a 64-step sequencer, and MIDI/USB connectivity.

Here it is in action:

The MC-707 is a nicely designed tool, offering end-to-end DAW-less track creation, and saw Roland make a welcome return to this corner of the market.

It's a powerful and well-designed piece of standalone kit, which we can see becoming a creative hub for a lot of producers. From sketching the foundations of a club track to acting as the centrepiece of a live setup, this latest MC ticks a lot of boxes. Welcome back Roland.

Designed to be used on its own or as part of a wider modular setup, the striking Pulsar-23 offers, yes, 23 independent modules, 52 knobs, 11 switches and more than 100 inputs and outputs.

Read more: Pulsar-23 looks like the kind of drum machine you’d buy in a heartbeat

Model:Samples is immediate and affordable, but still retains many of Elektron’s deep and creative sequencing tools. It's a welcome departure for the company; a far more streamlined instrument than the rest of its range but still offering enough of the complexity of its higher-end instruments to bring something new. Conditional Locks and the extensive parameter automation feel genuinely fresh at this price, even if the sample engine itself doesn’t offer much to set itself apart from similarly-priced rivals.

The Volca Drum is a genuinely unique drum machine with creative depth that punches well above its price point. Sonically, its closest relations are probably Korg’s classic Electribes, but there’s enough fresh character here to make the Volca Drum feel like a new instrument in its own right. More than anything, it’s just nice to play with a drum machine that goes beyond aping the same old ’80s drum boxes.

For dance music producers, this is a must-try, particularly when you can grab one for less than $/£150.

For its size and price, there's a lot to like about the UNO Drum. Its sound is meaty and gritty, with decent variety, which might not suit everyone, and we really enjoyed throwing together patterns with it. The options to automate, recall, humanise and randomise elements are good features at this price, too.

Roland's MC-101 is a more portable groovebox than its big brother, the MC-707, but boasts many of the same features, while cutting the track count down to four and offering a battery power option.

Read more: Roland goes back to the groovebox with the MC-707 and MC-101