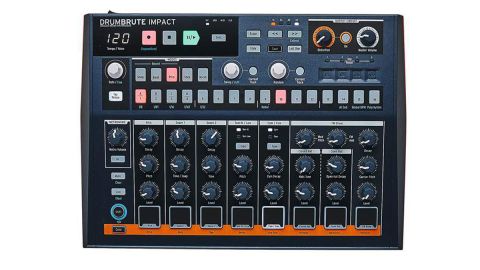 Not the most versatile on the market, but it combines quality drum synth sounds with a killer sequencer, at a very tempting price.

If you were to spend a lot of time reading the internet’s various comment sections - not advisable - you might come away with the impression that Arturia’s original DrumBrute is a generally bad drum machine.

Opinion on the subject has been - to us, surprisingly - divided. While there are plenty of fans, some commenters will tell you that the sounds from Arturia’s analogue drum machine are borderline unusable. On its first release, we gave the DrumBrute a glowing review within these pages, and we stand by that. While, admittedly, its analogue drum sounds tend to skew towards a bread-and-butter vintage character, it remains a great source of punchy, classic drum sounds.

Moreover, its sequencer is excellent, hitting on the ideal balance between intuitiveness and creative depth, with interesting features like the ability to easily program polyrhythms, and per-track swing and randomisation. Fortunately, all of those powerful sequencing tools are present in this new compact, wallet-friendly follow-up, the DrumBrute Impact.

Like its bigger sibling, the Impact couples its sequencer with an all-analogue drum synthesis engine and very flexible pattern saving/song mode capabilities. Visually, the Impact looks pretty similar to its predecessor, housed in a solid, navy blue chassis familiar from the rest of Arturia’s ‘Brute range.

The Impact is narrower than the original, but it’s also slightly taller and deeper, and the wood panelled ends of the original have been replaced by an almost fin-like shape with orange trim. The front panel layout is very similar, so anybody familiar with the original can drive straight in.

So what has changed? The most obvious difference is that the Impact has fewer drum channels than its predecessor. The 17 drum sounds of the original DrumBrute are here trimmed back to 10, which share eight control channels. The Impact is not, however, simply a cut-down version of the larger DrumBrute - much of the sound engine has been overhauled here, and the overall range of sounds has been switched up. Here we get one Kick (as opposed to the two kicks on the original DrumBrute), two Snare channels, High/Low Toms, Cymbal/Cowbell, Closed Hat, Open Hat and an FM Drum. As before, each has a handful of rotaries on the front panel for controlling the level and one or more sound parameters.

The biggest change here though is in the introduction of a new Color mode, which lets users quickly change the tonality of each sound by shift-pressing the pad underneath each channel. Significantly, the Color parameter can also be engaged per-step via the sequencer, giving users a basic way to automate sounds.

One of the main drawbacks of the original DrumBrute was its lack of automation recording or MIDI CC control for sound parameters, which effectively meant that the only way to add movement to sounds was by getting hands-on with the front panel rotaries. While this is still the case for the DrumBrute Impact, the ability to engage/disengage Color does allow for an extra layer of variety within patterns, particularly when it’s coupled with accented steps within the sequencer.

The sounds themselves are noticeably punchier than that of the original DrumBrute - hence the name, we guess? - but also a little more characterful, particularly with Color engaged. While the Impact loses the second kick of its bigger sibling, the kick here has a broader range. At its most vanilla, it has a punchy, full-bodied 909 quality.

There are wide ranging controls for both the pitch and decay, which allow for everything from long booming bass hits to tight, mid-range pops. The kick’s Color mode engages analogue distortion, which sounds great - adding lots of gritty mid-range harmonics in a really pleasing, complimentary way. The two snares are roughly similar in their core sound - a mid-range thud paired with filtered white noise - but differing controls allow them to be shaped into contrasting territory.

The first has a Tone/Snap control which ranges from a flat white noise hiss at one extreme to a punchy tom-like thud at the other. The second snare, meanwhile, has a tone control which filters down the sound to more of a murky, low-mid hit. The first snare’s Color option adds Body, giving it a woody mid-range thump. The second’s Color mode is labelled Clap, and adds a slightly staggered attack element for a handclap-like quality.

The Impact’s FM Drum channel uses frequency modulation to create percussion sounds with extra complexity. This uses two oscillators, the carrier - the main sound you hear - and the modulator, an audio rate signal which modulates the frequency of the carrier when the FM Amt rotary is turned up. Without FM engaged, the FM Drum sounds much like a high tom, handy for simple top-end percussion hits. Dialing in modulation makes things much more interesting though; allowing for discordant hits, clangorous tones and dark FM bass throbs. The FM Drum has a decay rotary too, which lets it range from short percussive knocks to longer synth hits. Sadly, however, you can’t sequence or automate the pitch. The lack of CC control or automation overall is less bothersome, but the FM Drum really misses it. The drum sounds best when you start tweaking the pitch of the two oscillators as a sequence plays, and it’d be good to do this automatically. An expression/CV input for either carrier or modulator pitch would’ve been great. Alternatively, pitch sequencing would let us use the FM Drum as a basic synth; it’s a shame that’s not an option.

Both snares have wide ranging decay controls, which can go from long washes of sound to tight rim-like hits. The low and high toms are fairly vanilla, Roland-style sounds, but both have enough punch and body to cut through a groove. Although they can be sequenced independently, the two sounds share a pitch control, so it’s impossible to tune one without affecting the other. Both lean towards the low-mid end of the spectrum, making them good for techno-style bass.

Despite its name, the high tom is more of a mid-range instrument, although this isn’t a problem since high-frequency percussion is easily covered by the FM Drum. The cymbal and cowbell are probably the weakest of the Impact’s sounds. The cowbell is a decent 808 clone, but has no tone or pitch controls so it’s a bit of a one trick pony. The cymbal, meanwhile, has a decay control and can have its pitch shifted by the Color option. It’s a decent enough sound but in terms of its character it’s pretty similar to the open hat - a more pronounced ride or crash feel may have been preferable.

As with the original DrumBrute, the hats have quite a metallic quality, which we really like, but others might not. There are front panel rotaries to control the tone of the hats and the open hat decay. The Color switches below the two hat channels can extend the length of the closed hat and change the overall harmonics of both sounds; this latter option gives a nice alternative flavour that broadens the sonic scope.

The other significant change from the original DrumBrute is the master effects. The Impact loses the Steiner-Parker filter of the original, but gains an output distortion with level control and on/off switch. While this isn’t the most extreme analogue distortion in the world it adds a nice bit of saturation and compression-like gel to the overall sound.

Taken together, we really like the sounds of the Impact. It’s perhaps not the most sonically flexible drum machine on the market, but producers of certain electronic genres will find a lot to like. To our ears, these sounds lend themselves most to rugged analogue house and techno, but there’s also enough punch and bass for hip-hop production too. Individual sounds can sound a little dry straight out of the box but we don’t find that too problematic.

The Impact has individual mini-jack outputs for the kick, snares, hats and FM drum, so it’s easy enough to add a touch of processing to each sound (a little outboard reverb really brings the snares to life). Beyond this, the rest of the Impact’s workflow is pretty much identical to the original DrumBrute. As before, the sequencer is very intuitive but has some great creative tools. The polyrhythmic Last Step function is a highlight, along with per-track swing and randomisation.

Again, the sequencer Roller and Beat Repeat tools are a couple of handy options for spicing up fills and turnarounds. The ample crop of 64 pattern slots means there are plenty of space to save and recall grooves (although only pattern and tempo info is saved, not sound parameters) and the Song mode means these can easily be stitched together into full arrangements. The Impact also retains the flexible sync I/O of its predecessor, with MIDI in and out, USB and analogue-friendly clock in and out ports on its rear.

The original DrumBrute was a very solid all-round drum synth paired with an excellent sequencer, at a price that made it very tempting. The Impact doubles down on all of this. While it lacks a little sonic flexibility and isn’t all-round perfect, it is an inspiring and enticing drum machine at a very good price. Whether these new sounds will win over naysayers remains to be seen, but we’d recommend they take a fresh look.