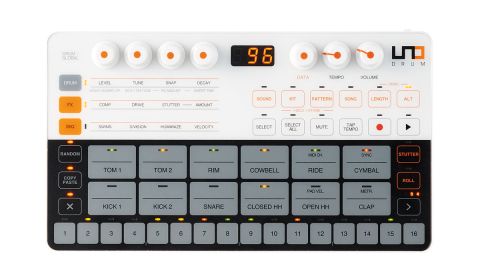 There’s a lot to like about the UNO Drum’s punchy sound and flexible feature set, but it’s held back by ‘budget’ hardware.

Having spent several decades focused on software, MIDI devices and mobile peripheries, Italian outfit IK Multimedia made its entry into the world of analogue instruments with last year’s UNO Synth.

While that instrument was impressive, there was no getting around the fact that the hardware itself felt a little ‘cheap’ - its lightweight, plastic construction, rudimentary keyboard and simplistic control surface belied the rich, weighty monosynth contained within.

With this follow-up groovebox, that dichotomy between build quality and feature set is, if anything, more prevalent. The hardware itself is largely the same as that of the UNO Synth; the plastic chassis is identical, albeit in white, with an identical row of seven rotaries flanking a fairly basic calculator-like screen. Again, all other control is handled by an array of front panel ‘buttons’ built into the plastic top panel, which offer little tactile response. The main difference here is that the two-octave ‘keyboard’ of the synth has been removed, making way for a 16-button X0X-style sequencer and grid of 12 trigger pads.

As with its predecessor, the UNO Drum is disarmingly lightweight, which gives it a slightly toy-like feel, but does mean it’s easy to transport. That portability is added to by the fact that the UNO Drum can be powered by either a USB connection of four AA batteries. In our tests, however, battery lifespan has proved to be pretty poor - using a fresh set of alkaline AAs, the low battery indicator began flashing after only 25 minutes, although power lasted for around an hour and a quarter in total.

The budget nature of the hardware is more of an issue here than with the synth for two reasons. Firstly, the UNO Drum arrives at a slightly higher price point - it’s around £50 more than the Synth was on release. Secondly, it faces stiffer direct competition, notably from Arturia’s excellent DrumBrute Impact, another analogue-powered drum machine that, at the time of writing, is selling for around £30-£40 less than the UNO Drum. Comparing the hardware of the two isn’t particularly favourable to the UNO; with its chunkier plastic body and abundance of pads and rotaries, the Impact feels significantly higher-end.

The other hardware issue here - again, something Arturia’s machine does better - is the lack of I/O. Connections here are exactly the same as the UNO Synth: USB, MIDI in/out (via included adapters) and 3.5mm audio in and out ports. While a single audio output is fine with a monosynth, running 11 drum machine voices through a single mini-jack output is a bit of a pain. That said, the inclusion of an audio input is a nice touch, allowing for additional inputs to be run through the internal compressor.

Fortunately, the hardware itself isn’t the whole story here. As with its synth predecessor, the UNO Drum is more powerful than it initially appears and, in several areas, is more fully-featured than many other drum machines at this price point. The sound engine itself offers 12 tracks across 11 voices. There are two kicks, two toms, a single snare, clap, rim, cowbell and clav, plus open and closed hats which share a voice between them. Generation of these sounds is split between analogue synthesis and PCM sample playback. There are six analogue engines available, one each for the two kicks, snare, clap and open and closed hats. Each track has five varieties of sound to choose from - for the analogue-equipped tracks, this equals one synthesised sound plus four sampled options, while the remaining tracks each have five PCM variations to choose from. It’s a bit of a shame that samples are confined to their specified tracks and there isn’t more scope for swapping the PCM sounds around - ie clap samples can only be loaded to the clap track, so there’s no way to load multiple varieties of clap, hat or snare across multiple tracks. Still, the combo of analogue and PCM does offer plenty of variety overall.

The analogue sounds themselves are generally pretty high quality, if a little lacking in flexibility. The analogue engines share a set of controls on the front panel, for editing level, tuning, snap and decay (except for the clap, which has just decay and level). While these go a decent way to shaping the tone of sounds, there’s not too much variation within the analogue engines themselves. What’s there sounds good though; the hats are crisp and metallic, the clap nicely crunchy, and kick 2 is subby, with a long delay - great for rumbling techno bass when at lower tunings.

The analogue snare can be a little weak-sounding, but includes a filterable white noise element that expands the tonal variety nicely. Kick 1 is the highlight here though thanks to its added frequency modulation capabilities. In its base state, it’s punchy and 909-like, but with FM added it can become altogether weirder and more characterful, capable of sweeping electro-leaning perc tones.

The UNO Drum has a generous onboard memory, allowing it to store 100 kits and 100 patterns. Kits are full selections of 12 sounds including settings for the global compressor and drive effects. Patterns, meanwhile, are saved with all automation. The ability to load Kits and Patterns individually is a nice touch for inspiring new ideas, meaning you can try out an assortment of different kits on your current pattern, or vice versa. Straight out of the box, the 100 kit and pattern bank slots come filled with factory presets, which do a good job of showing off what the instrument can do, as well as offering nice creative starting points.

The groovebox also has a song mode, which allows up to 64 patterns to be chained together to make a full performance. This is done using the sequencer steps, each of which can be assigned any pattern from the onboard memory. Unfortunately there’s no option available for saving multiple Songs to the UNO Drum though.

The sampled sounds tend to lean towards the crunchy, grittier end of the spectrum. The engine itself is 32kHz and 12 bit, but the choice of sounds - which are lifted from IK’s SampleTank - is very reminiscent of groovebox and sampler beats of the ’80s and ’90s. On the whole, the resulting sound of the UNO Drum will mostly suit those looking for punchy, vintage-sounding drum machine timbres, but it does provide a decent amount of variety within that bracket.

There are two analogue audio processors onboard the UNO Drum, offering compression and drive. These are both fairly simple affairs, with just an amount control for each, but they sound good and suit the overall ethos of the groovebox nicely. The drive can be pushed into beefy, rich distortion and the compressor does a great job of tying the various sampled sounds together. It is a slight shame not to have any reverb or delay here. Some of the PCM sounds do include long sampled tails, but on the whole sounds - particularly the analogue snare - can sound a bit dry. On a drum machine with multiple outputs this wouldn’t be too much of a problem, as you’d have scope to treat individual sounds externally. Having everything summed through the one mini-jack, however, severely limits the potential for adding effects to individual sounds.

The UNO Drum’s sequencing workflow is generally pretty solid. While the sequencer buttons lack tactile response, the overall layout is logical and bright LEDs provide enough visual feedback to keep things clear. Sequences can be up to 64 steps in length, with a variety of timing divisions available. There are a number of performance effects and features available that help add interest to patterns, including swing, humanise and a randomisation tool for auto-generating patterns. A velocity dial lets the level of each sequencer step be adjusted too.

Sat alongside the trigger pads are buttons for adding rolls and stutters for sequences and performances. Roll can generate both classic beat repeat effects and preset fill patterns, all of which can be recorded into sequences. Stutter, meanwhile, is a deceptively deep lopping tool. There are eight modes dictating the length and style of the loops, plus an ‘amount’ dial, which in most cases adjusts how many of the Drum’s sounds are affected. It’s a lot of fun to mess about with.

While sequencing is probably the best way to use the UNO Drum, it can be played live, MPC-style, using the 12 trigger pads. As with the other front panel controls, these are completely flush and offer no physical response, so it’s not the best playing experience. You can engage two levels of velocity though - at 100 and 127 - which adds to the playability. The UNO Drum also boasts recordable parameter automation. This works as you’d expect - hit record, adjust a rotary - though it can be input either ‘live’ with the sequencer running or offline, by simply holding down a sequencer step. The Erase function allows automation to be cleared individually for each track too, which is handy.

For its size and price then, there is a lot to like about the UNO Drum. Its sound is meaty and gritty, with decent variety, which might not suit everyone, but we really enjoyed throwing together patterns with it. The ability to automate, recall, humanise and randomise elements are all good features at this price too. The low-budget hardware is a hindrance though - more so than with the UNO Synth. That single minijack output in particular may really come to irritate me in the long run.

It’s worth highlighting that the UNO Synth’s price appears to have dropped recently, and we imagine the same may happen with the Drum. Were it to come down to somewhere more in line with Korg’s Volcas, those hardware hangups would become far more tolerable. As it is, this is still a good groovebox, but it’s worth being aware of its limitations.