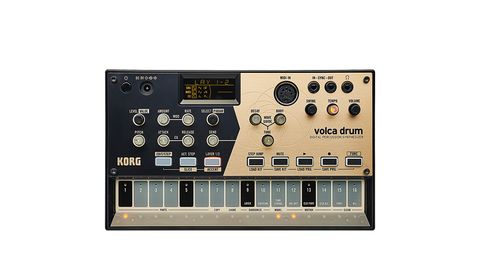 A genuinely unique drum machine with creative depth that punches well above its price point. A must-try.

The third percussion-focused instrument in Korg’s Volca range does things a bit differently.

While the previous Volca beatmakers - Volca Beats and Kick - both condensed analogue drum synths into the range’s compact hardware format, the Drum uses digital synthesis to create a percussive palette that’s broader, and weirder, than its predecessors.

Rather than use PCM samples as many digital drum machines do, the Volca Drum’s sound engine uses a system of virtual analogue oscillators, modulators and resonators to create its percussive sounds. The sound engine has six parts, each of which is identical to the others, so you’re not restricted to, say, using a certain part just for kicks and another just for snares. Each part has two identical layers, which can either be edited individually or as one.

These layers are comprised of three elements: a source oscillator, a modulator and an envelope generator. On the source front there are five options, offering sine and saw waves along with three flavours of filtered noise. The pitch of this core sound is then altered via one of three modulator types, selectable between a rise-fall envelope, a sine wave LFO or a random signal generator. Finally, the sound’s amplitude is modulated by one of three envelope types: linear attack-release, exponential attack- release or multipeak attackrelease. Both the modulator and envelope have two controls on the front panel - Amount and Rate for the modulator, Attack and Release for the EG - allowing for control over the shape and length of each layer’s sound.

Each layer has its own pitch and level control too. There are also several ‘hidden’ shift functions available for each layer, which can be used to apply bitcrush, wavefolding or drive effects, as well as alter the pan and gain. All of these parameters can be edited for each layer individually, making it easy to design full, complex sounds. Combining individually tailored layers allows, for example, the creation of kicks with a long, full-bodied sub and punchy, abrupt top end, or snares which begin with a sharp, metallic attack and then morph into a long, noise-like release.

For the most part, the Volca Drum’s hardware stick to the range’s established specs. As usual, the instrument is powered by AA batteries but also has a power input for use with a 9V power adapter. Audio output is provided by a 3.5mm headphone output or (middling) built-in speaker, and the standard pulse sync and MIDI-in ports are present and correct. The most notable variation here comes in the form of an upgraded LCD screen, which looks great and offers a higher level of detail than those on most other Volcas. The front panel is covered with a sleek-looking plate of etched aluminium too.

The core of the Volca Drum’s character, however, comes from its ‘Wave Guide’ resonator. This is set up as a global send effect, allow each layer to be sent to it by an independently controllable amount. The Wave Guide itself has three controls: Tune, for the pitch of the effect, Decay, controlling its length, and Body, which alters the timbral characteristics. There are two varieties of resonator available too, switchable between Tube and String styles. The results that can be achieved using this resonator sound fantastic, ranging from odd faux-reverb effects to pitched tonal stabs and spiralling, modulated decays.

The Drum adds some extra sequencing tricks to the standard Volca setup too. As is standard for the range, it has a touchstrip-controlled 16-step sequencer, which makes use of Korg’s Motion Sequencing system to record automation from all of the front panel rotaries. The usual Active Step feature is present here too, which lets users disengage chosen steps from the current sequence for on-the-fly variations and polyrhythms. Here though, we also get a new Slice function, which can add rolls to a chosen sequencer step, the length of which can be edited from the front panel. There’s an accent function too, with 16 levels of strength that can be applied to chosen steps. The Drum also lets users assign parts to a choke group, for extra control over the interplay between its sounds.

There’s a new Randomize feature added for the Volca Drum too. This has two variations: Randomize Layer and Randomize Pattern. The former can be used to auto-generate a sound engine setup, while the latter generates a rhythmic pattern. It’s a shame there’s no way to control the amount of these randomisations - ie the option to select between a complete reworking of a pattern and merely adding some subtle variations - but at this price point, those limitations are fairly understandable. It adds a slightly enhanced memory function too. We get two types of preset - Kits and Programs.

From our few days of playing with the Volca Drum, we’re fairly enamoured by it. For designing sounds, its multilayer engine is considerably deeper and more interesting than anything we’ve seen on a Volca beatmaker before. If anything, it’s a disappointing that it’s held back by the restrictions of the Volca hardware; stick this sound engine in a large instrument with extra outputs and a more extensive sequencer and we’d happily pay twice the price.

Importantly the sounds you can create are usable and inspirational. The results that can be achieved by modulating the pitch and shape of sounds, or messing with the Wave Guide, are a quick and easy route to genuinely ear-catching drum sounds. Sonically, its closest comparison is probably Korg’s classic Electribes, but there’s enough fresh character here to make the Volca Drum feel like a new instrument in its own right. More than anything it’s just nice to play with a drum machine that goes beyond aping the same old ’80s drum boxes. For dance music producers, this is a must-try, particularly at this price.