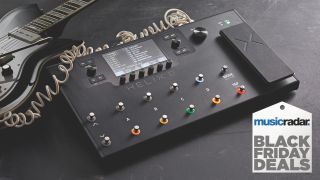 Ever since the development of their original POD in 1998 - which kick-started a whole revolution of amp-modellers with on-board digital effects - Line 6 has been at the forefront of modern technology.

They’ve pioneered digital amps, multi-effects units, wireless systems, software and even instruments themselves – all of which have benefited everyone from bedroom guitarists to top-level touring musicians. Which is exactly why Black Friday 2019 could be the ideal time to pick up some of their latest guitar gear…

In 2015, Line 6 unveiled their new Helix floorboard and rack, which boasted dual-DSP processing to “deliver a level of realism that hasn’t been previously attainable from modeling” and bring along “an entirely new playing experience”. The popular series has since been expanded upon with options to suit just about any kind of player.

As well as amp heads and effects, the Helix also gives users control over cabs and mics to fine-tune every aspect of their sound and dial in some of the most realistic tones in digital history.

Other Helix models in the range

Along with the flagship Helix, there is also the streamlined LT version which offers the same dual-DSP processing and award-winning HX Modeling technology in a more affordable package.

For those only interested in the effects side of the Helix range, there’s the HX Effects pedal – which may be compact in size, but certainly not in sound. Not only does it boast the full array of Helix effects, there’s also the welcome addition of its legacy effects from the highly popular M-Series and Stompbox Modeler units.

Similar extras come with the HX Stomp, which offers both amp modeling and effects in one tiny ultra-compact package and sells itself as a “super stompbox” that can also double-up as your backup or travel rig.

Line 6 Helix deals: what to expect

While Helix gear isn't often discounted, deals have been spotted in the wild. With Black Friday and Cyber Monday here, now could be the time to strike. Here are the latest RRPs to help you decide if you're getting a good deal when you spot one: