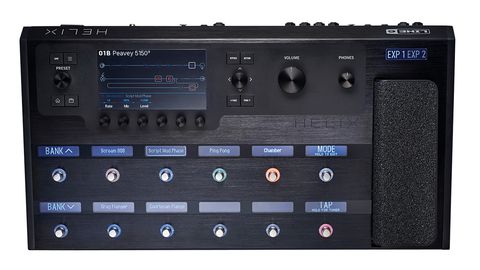 The Helix is a real powerhouse that can be used on its own or as the centre piece of an extended gear system.

Line 6 was a pioneer of affordable amp modelling hardware, from the original POD through its many successors.

Lately, though, a new breed of amp modellers have occupied the limelight. The likes of the Fractal Axe-Fx and the Kemper Profiler offer massively increased processing power for modelling that gets closer to the sound and feel of the real thing.

Now, Line 6 has responded with the dual-DSP-powered Helix, which combines amp and effects models in a large, rugged floor pedal.

There are a massive 1,024 preset locations onboard the Helix, organised into eight setlists that contain 32 banks with four presets each. Each preset can have up to four stereo signal paths, each made up of eight blocks populated with amps and effects.

With the current count of 41 modelled amps, seven bass amps, 30 cabs, 16 mics, 80 effects and the option of loading speaker impulse responses, there's great potential for sound creation. Line 6 has implemented an easy editing system, complete with a joystick, and - get this - touch-sensitive footswitches offering a shortcut to parameter adjustment; you can even use these with your feet to select a parameter before adjusting it with the pedal treadle!

That treadle can be assigned to plenty of functions, as can all of the footswitches. There are two main operating modes for these: Preset recalls, well, presets and Stomp turns individual effects on and off, but switching between the two is instant, and when playing live, you can swap presets and recall effects at will.

If you want to use any of your existing pedals, the Helix even has four effects loops that can be turned on and off within a preset. The amount of socketry round the back means you can connect the Helix to just about anything, including into an eight-in/eight-out audio interface for computer recording, with headphone monitoring and mic and aux inputs.

MIDI or external amp switching functions can be assigned to footswitches, too. Add in the coloured LED rings and LED 'scribble strips', and you always know what function is assigned to which footswitch.

Playing through the onboard amps is uncannily like playing through the real thing. As good as the POD HD models were, Helix's efforts have an increased level of both accuracy of sound and playability, and will react to the nuances of your playing style - these are sounds that can stand side by side with Kemper or Fractal models.

The onboard modelled amps include a good selection of vintage classics, some more boutique choices and some Line 6 originals, while the effects run from vintage favourites right up to cult overdrives.

There are some great sounds here, especially when you get beyond the factory presets and shape things to your own taste. While many amp sims do high-gain very well, it can be much harder to recreate decent clean and 'just beyond clean' breaking up tones, but the Helix nails it.

We particularly like the Fender Deluxe and tweed Bassman for these. At the other extreme, metalheads and hard rockers will have no complaints about the Rectifier, Uberschall and 5150. Among the effects, the Uni-Vibe sim's gloopy warble stands out, while the Minotaur Klon clone does a fine job of adding that extra something in front of an amp.

The four years that Line 6 took to develop the Helix were well spent, and it's a valid alternative to its rivals. Kemper and Fractal both have more amp models but, as Line 6 tells us, "Helix is still in its infancy and we expect big things to come", so more models and features can be expected via firmware updates.

While Kemper's Profiler has the ability to mimic the sound of any amp, the Helix offers a more compact and manageable stage experience than the separate head and controller provide. In the same way, it's more practical than an Axe-Fx II, but has a serious rival in the AX8 if you just want a set of sounds simply delivered.

However, the Helix's advantage lies in its comprehensive input/output and signal routing ability, which can facilitate just about any guitar-related studio or onstage task you can think of.