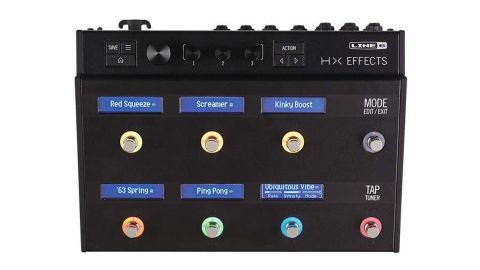 The rest of your pedals, analogue or digital, had better watch out: the HX Effects might just replace the lot.

We were blown away by the Line 6 Helix series when it came out.

We found ourselves wondering when Line 6 would follow up with a unit for those of us that have no need for amp modelling. The HX represents Line 6 making that jump, condensing the rock-solid build, intuitive user interface and neat form-factor of the Helix series into a svelte multi-effect box that will fit on a Pedaltrain JR with room to spare.

In order to save on space, the HX doesn’t have the expression pedal of its larger siblings, but it has optional inputs to allow for two to be connected. By default, the first is a wah, and the second is a volume, but these are editable.

As on the larger units, editing is highly intuitive. Lightly touching a footswitch opens the edit menu for that patch, with the large rotary and left-right buttons used to switch patch and parameters. More complex functionality like editing signal flow isn’t far away from the user - a couple of clicks through the menu gets you there, and makes creating banks of your own a breeze.

We found that once we’d assigned a custom bank and signal chain, we didn’t need to bank change often; for function or cover band work, it’s easy to see how the large capacity for user banks would come into its own.

In terms of sounds, the same high-quality effects from the flagship units are present and correct, with a number of additional effects that have been developed in the meantime.

Perhaps in response to those pedal nerds that have unique-sounding boutique pedals we’d want in our chain, Line 6 has added some additional ‘out there’ sounds to the HX. All of the expected choruses, tape echo, sweep echo, reverse delays and filters are present, but there are now more exotic sounds like the gorgeous Particle Verb, presumably a reference to the Red Panda Particle granular delay and reverb.

The ability to run every effect in stereo means that the combination of delay, chorus and reverb can be used to quickly build up radical, atmospheric patches for use in parts of a recording or song.

The drives on offer are excellent, and into a small tube amp we also found the boosts allowed us to drive the amp into saturation, or up the ante for soloing. With a real drive in front, the unit was able to keep up, and the interaction between external drive, HX and amp was close to indistinguishable from stacking two real drive pedals.