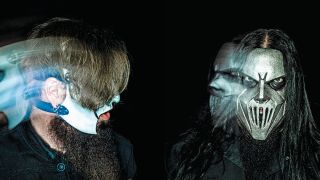 Welcome to the world of doubles – every single nominee that readers voted to make our top ten is a twin guitar team. Maybe metal just works better that way… Riff Lord Tony Iommi notwithstanding.

There's plenty of familiar faces here that have earned loyalty with formidable back catalogues and live reputation, but there's at least one relatively newer pair we're pleased to see make a debut here.

Slipknot's pair won over 17,000 votes from you leaving no doubt that 2019 was their year. We Are Not Your Kind proved no matter what drama surrounds the band, they always deliver as a creative unit.

The album featured the usual thrilling rhythmic interplay between Thomson and Root that should please the Iowa faithful – Solway Firth stands up with their best – alongside an experimental spirit in tracks like Spiders that brought out new depths from Root.

These two young upstarts didn't even release an album in 2019 but they were certainly touring hard – demand isn't dwindling any time soon. And why would it? Only Maiden have a back catalogue with so many singable guitar leads.

No band incite as much debate in metal, but no band have set the bar higher – creating a rite of passage for countless young players getting to grips with the genre. Because if you can nail those Justice For All rhythms, you're pretty much set for life.

The boys were back in town in 2013 when Head finally rejoined the fray but The Nothing album found them really hitting their creative stride again on one of Korn's strongest albums.

It's easy to overlook that these two created their own sound – without those deep rhythmic riffs and eery twisted nursery rhythm lead lines it just isn't Korn.

On paper, norse mythology and metal are a winning combination, but that doesn't mean Amon Amarth haven't had to hone their steel through years of hard work.

Mikkonen and Söderberg have developed a sound that fuses the best of melodic death metal with a classic approach to metal dynamics; these guys know what anthemic mean. The Berzerker album saw their profile rise again - who knows where their longship could sail next.

Rammstein’s Paul Landers: "I’ve always been the no-amp guy! I have never really bothered with them"

There's a constant fear every Rammstein album could be the Germans' last, but they're simply too good at what they do to throw it away. Indeed, their self-titled effort saw them working closer as a unit again.

Their videos make the news (see Deutschland above), their shows drop jaws, but we think it's but the Landers and Kruspe school of massive guitars that has really made Rammstein the uncompromising world force they are today.

(Image credit: As I Lay Dying )

"We listen to what each other is doing"

A couple of years ago, with everything that had happened with leader Tim Lambesis (prison was involved), nobody thought they'd see As I Lay Dying again, never mind a brand new album. But here we are; and they really made their second coming count.

It's undeniable Sgrosso and Hipa are two of the most influential players in metalcore, but Shaped By Fire proved there's no sense of laurel-resting going on here. With everything to prove, they came out blazing.

It's great to see a British band make your list – and WSS have really put the graft in to deserve recognition. The Sheffield five-piece have been especially busy this year, with fourth album So What? proving they're a band keen to push the envelope of expectation on what their sound can be while still delivering absolutely killer riffs.

The dust has hardly settled on that and they've released a brand new single with Faker's Plague. The future looks bright, with the band holding creative control through their Sleeps Brothers label and creative HQ.

As the legends bow out it's time to take stock on what a gift they were to metal; Holt especially deserves to take a bow for doing Jeff Hanneman's legacy proud on their final world tour.

The dark void they leave will never be filled, but we're just glad it's there to remind us of the standard they set.

Me and my guitar: Adam Dutkiewicz, Killswitch Engage

Are Dutkiewicz and Stroetzel metalcore's Angus and Malcolm? Well they're dependable, weathered the storm of vocalist changes and are an absolute joy to watch. Because they love what they do and they do it very well indeed.

Don't confuse Dutkiewicz cape-wearing onstage japes for a man who isn't deadly serious about the music he makes. As the band's producer (and even one-time drummer) he's helped make Killswitch such a force; the kings of metalcore.

Mixed feelings here, on the one had Hexed was a welcome comeback from the Finns – full of reminders of what a force Laiho's band are. Guitars duel with keyboards that are unashambly high in the mix and all is right with Laiho's world. Freyberg's recording debut also boding (of should that be bodoming?) well for the future.

Except all isn't well. With everyone except Laiho and Freyberg recently handing their notice to leave the band recently, and the departing 3/5 owning the Children Of Bodom name, this could well be the swansong for the band we knew. At least it's a good one.