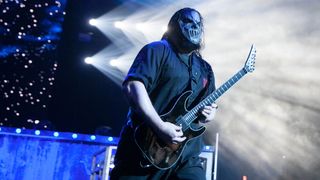 “I grew up listening to my dad’s Al Di Meola records and Return To Forever records,” says Slipknot guitarist Mick Thomson, in a rare interview with MusicRadar to promote his band’s new live documentary, Day Of The Gusano.

“Some of that original jazz fusion stuff - Larry Carlton, Robben Ford, as well as bluesier stuff like the Cream live records - blew me away. Even though my dad didn’t play himself, he had this amazing music collection and great taste in guitar… which was inspiring to me and played a part in me wanting to get involved. It all contributes!”

You could say those early experiences hearing complex yet incredibly musical recordings had a profound effect on the guitarist - who now plays in the biggest heavy metal band since Metallica.

And yet, despite jazz rock being a million miles away from the rib-smashing heaviness Slipknot built their name on, there’s similar methodology in its ambition - daring to inject fierce technicality into music that speaks to the masses rather than a chosen few…

“I remember those Dream Theater drum auditions they put online… expecting the guys to remember and recall rhythms that were getting clapped out at them. It’s unbelievable musicianship! But it really is another language, because in those auditions Derek Roddy [ex-Hate Eternal/Nile] - who is a monster death-metal drummer - found it challenging.

“It’s like math, and some things don’t translate with everybody, even the best. When it comes to making music, certain things happen between certain people that cause certain things to happen. Chemistry is ultimately what’s most important for any band…”

The Iowan metal giants will be bringing their violent phenomenon to the screen with new DVD, Day Of The Gusano - Live In Mexico.

The footage was recorded at the band’s first-ever performance on Mexican soil and directed by percussionist/vocals M. Shawn Crahan, better known to their loyal legions as Clown.

Day Of The Gusano is out in a variety of formats on 20 October, and available to preorder now.

To channel the guitarist’s formidable playing style, read on, as Mick offers his five tips to guitar godliness…

“Using different tools helps you break out of the mould. After playing for a number of years, you fall into a certain pattern that’s just you. You become you more and more over time, and it gets hard to strip back and see other things. Writing on bass is such a different approach, plus it’s good for your fingers!

Me and my guitar: Slipknot's Mick Thomson

“It’s exercise for your fingers: you have to stretch more because of the scale length. Simply for the athletics, playing bass is great for guitar players, and offers a different perspective musically.

“With a bass in my hands, I tend to think more rhythmically or more sludgey. On a guitar, I might start throwing in little sweep arpeggios and have to force myself not to. On a bass, it’s a whole other thing, with physical strengthening that’s good for any player.

“Your head will be in a different place, and I think that’s important. People don’t realise they probably repeat themselves more often than they think they do. If you feel stuck in a rut writing things or a certain part isn’t coming up for a song that needs something cool, play the fuckin’ bass! You’ll come up with something you wouldn't have standing there with your guitar in the basement. Different ways of thinking are good; they keep your mind open.”

“Early on, a lot of my picking development came from a Paul Gilbert video on VHS. That three-note per string thing (9, 10, 12 on the D, 9 on the G and back) is something I did a lot when I was younger. You can probably go back and find it on YouTube somewhere - people can still learn a lot from those.

“I remember seeing it when I was around 14 because a friend had it and at one point he pulled out the drill. We looked at it each other like, ‘What the fuck just happened?’ That’s not even human. That’s not even real. How can anybody do that, which was so far beyond my comprehension.

“Once you dive in and start, obviously it takes a while to practice, you’ll get better. It’s different for each individual. Think about Usain Bolt: if he didn’t have something special about him, everyone would run like that!

“I always tended to play too fast because it felt fun, but unless I was jamming along to Master Of Puppets, I was playing too fast. My speed was above a lot of that stuff because I was doing so much practising. Instead of legato, I gravitated towards every note picked - though it’s one thing to rip on a string and another to make your hands sync up properly.

“I like a lot of those ’80s shred guys - the Chris Impellitteri tuitional is insane: it’s like watching Yngwie’s lessons doubled in speed! When I first saw that, I spat my drink out wondering what the fuck just happened.

“I loved Tony MacAlpine on Maximum Security. I was thinking Maximum Overdrive for a sec, but that’s a terrible movie. There are some fucking songs on there that just build to blinding speed. He also had these mindblowing piano pieces on those albums.”

3. Add your own little colours

“There probably aren’t a lot of metal bands that use bends as much as us. I have to stop myself, because I do a lot of ghost bends, like on the song Eyeless - when I recorded that, I thought it was cool having the bottom drop out by using the wang bar.

“I would do things with picking and harmonics, bends and squeals, but after a while I thought I sounded too much like Immolation… who I absolutely love. They are the gods of bends and harmonics in riffs, especially on the first three records, which were huge for me. I didn’t want to step on that turf too much. I had to pull the plug and come up with parts that sounded different.

“Part of my sound came from experimentation. Part of it was the picking - like how Randy Rhoads did a lot of that digging in on the Tribute live album. I probably originally picked it up off that.

“I was always into the idea of making music sound even more evil by incorporating those techniques. Anything that adds texture, colour or uniqueness to what you do is a tool, so make something interesting.”

4. It’s all a balancing act

“I learned a long time ago that crazy shred guitar is pretty much only enjoyed by the person playing it and the other people trying to play it! It’s fun to throw it in there and surprise people so they think, ‘Ah, the guitarist really knows what they’re doing!’ but you also don’t want to alienate everybody. It’s hard to write a good song - you have to balance musicianship, musicality and listenability, without being some radio-rock candyass kinda thing.

“There was time when I was around 18 when I figured it’s actually harder to write a great thrash riff than it is figuring out a solo. I would sit down and work out parts from Doomsday For The Deceiver by Flotsam And Jetsam because it was one of my favourite thrash records.

“I loved songs like Metalshock because the picking was so fast and the chords moved around quick. I incorporated the lead stuff into the rhythms - it was like playing lead rhythm! It’s a bit like how Stu Hamm plays lead bass.

“There are so many bands nowadays whose rhythm parts are incredibly bonkers, like Deeds Of Flesh; I absolutely love their last record. Also, Gorod from France… those guys can definitely play.”

“When you work with other musicians, you really start to absorb this shared knowledge and approach. With [deceased Slipknot bassist] Paul Gray, it wasn’t like this whole other perspective; there was a vibe we had together. Even though our records sound different and there’s evolution, you can still very much tell it’s us.

“I was playing with Paul before Slipknot even existed, when I was about 19 years old. When you play with someone that long, you just know them. You know what they’re going to do. We played and played - it wasn’t really ill-fitting new things juxtaposed together; we were always on the same page because we knew each other.

“We all have this musical imprint of each other on top of our personal approaches. You see new perspectives and techniques in other players; you can absorb a lot of it subconsciously. It’s not like you go out and think you will change your perspective. It’s natural and inevitable to take on some characteristics that you learn from each other. It helps with our new music; that thing will always be there because it’s who we’ve been for so long.”