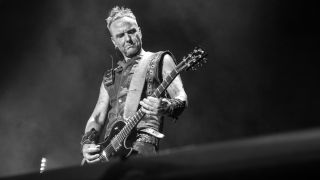 There is no other band in the world quite like Rammstein.

The German sextet have become pioneers of industrial metal, bringers of epic I-can’t-believe-they-just-did-that stage shows and undisputed masters of provocative imagery, to the point where no other bands ever get to follow their fire-kissed headline performances. And nor would they want to.

Alongside Richard Z. Kruspe, Paul Landers has been one half of their guitar unit from the off. This year sees the release of his PL1 Fly Rig, made by Tech 21 - the culmination of two years of fine-tuning in search of a product worthy of conquering stadiums the world over.

Speaking exclusively to MusicRadar, he admits that - unlike his co-guitarist - there are no amps or mics seen on his side of the stage. Instead, it’s all about going as direct as humanly possible.

Joining American virtuoso Richie Kotzen in having his own signature Fly Rig, Landers explains how the collaboration came about and why this approach is integral to Rammstein’s gargantuan guitar sound…

When did you start working on this with Tech 21?

“The lovely people that work there asked me if I was interested in my own custom-made Fly Rig because I’d been using Tech 21 products for a long time. I think they are a brilliant company and it must have taken us a couple of years and about six or seven different models to come up with the final version, which is completely different to any of the other Fly Rigs.”

What do you think makes it different to the Brit, Cali or Richie Kotzen models already out there?

“There is a different engine inside it; in fact, there are two independent engines in there: one for the Feuer [dirty] sound and the other for the Wasser [clean] sound.

“The main [Feuer] sound is based on the SansAmp GT2, which I’ve used for a long time. I have this specific setting that I dial in and we wanted to build the same sound inside the PL1 so that I could use it for my main tone.

“The other channel [Wasser] is based on my Roland Jazz Chorus, which is what I use for my clean sound on the records, but this version has this extra bite switch which gives the clean sound that feeling of breaking up, too, especially when really start digging in. There’s also a compression switch, because I love the tone from compressed clean amps.”

How does that fit into the band’s overall sound?

“Obviously in Rammstein there are two guitarists - the other guy [Richard Kruspe] was always the amp guy and I’ve always been the no-amp guy! I have never really bothered with them… whether it’s because they don’t like me or the other way round, haha!

“Sonically, we as a band have always preferred that mix of amps, with one a bit more ‘live’ and the other a bit more direct. That is the recipe for the Rammstein guitar sound.

“For years, I had the PSA1 and then over the last few years I’ve been using the SansAmp GT2. So with the PL1 we tried to rebuild my main sound from the GT2 with the Roland included, so I can use it for everything straight out of the box. There’s a built-in tuner and an XLR out, so I can go straight into the console for usage live in any stadium and arena we play!

“The hardest thing for me is to find a good main sound: it needs to be a lovely SansAmp kind of tone. Personally, I love it, but it’s a matter of taste because what I’m looking for is actually quite different to other guitar tones. It’s not trying to emulate anyone else; it’s much more unique.”

Tell us more about the delay section. What kind of pedals influenced that element of the PL1?

“I really like the MXR Carbon Copy Deluxe, which is a lovely analogue delay that is similar to the Electro-Harmonix Memory Man, which is actually my favourite, but it has a limited delay time and is too big. When MXR came out with the Carbon Copy models, I found them to be the best for me to use in whatever situation, in any venue.

“We tried to get that kind of delay, with a tap-tempo, built into the PL1 and I think we succeeded. It’s very easy to use and very inspiring when you turn it on.”

And then there’s both a negative and positive boost…

“I built this pedal so I could have it covering all the songs I have to play with Rammstein. For example, there are some with guitars in the verses at a lower level - so I built a negative boost to get my guitars sounding quieter. Then there’s the punch option, which adds more mids if I want to play lead.”

Along with the ambience/reverb and vibrato, that’s an impressive amount of tones out of one single unit…

“Yes, there’s such a wide range of sounds within this pedal, mainly because I like variety. You can go really hard and heavy or dial in a tone more like a surf guitar - that’s the clever thing: this product isn’t just focused on our style of music. I like the idea of someone being able to dial in anything they want… you can’t really do that with regular analogue pedals, for example.”

Have you ever experimented with the more high-powered digital units?

“For a while I was using emulation boxes and I absolutely hated fiddling around with all the menus. I’m so glad I have this now: I can just hit a knob and immediately have everything I need. I don’t like presets - in fact, I hate presets… if I want something I like to find it myself there and then.

“It’s like how I cut bread with my breadknife. I don’t want a preset for bread, tomatoes and other things… I hate that. I just want a sharp knife for bread and if I need to cut tomatoes, I’ll just use another knife, haha!”

“Exactly! It really can do anything I need. For example, if I go somewhere with my laptop, I don’t need anything else for recording my ideas. Maybe I might take a phaser, but that’s really about it.

“Sometimes me and our bass player [Oliver Riedel] go windsurfing - we’ll take bits of equipment to work on ideas, so next time all I need to bring is my PL1 and that’s it, I’m happy.”

Speaking of working on music… how’s the new Rammstein material coming along?

“Right now, it looks like this new record will be coming out next spring, and what we’ve been mainly doing is playing together in a circle, with all the guys in one room. We all go into the mixing desk and I had my PL1 prototype going direct. Same for the some of the other guys - our drummer [Christoph Schneider] has these electronic drums, so we’ve been using that to play a bunch of ideas together.

“It hasn’t been like a pre-production where each member is alone; it’s been more of an all-together kind of thing. We liked the sound of it so much that we’ve decided to make the record more of a band-unit recording than a bunch of guys playing separately. We’ll have to see how it all ends up on the record, but the basic idea is you are hearing a band playing… you could say it’s inspired by our live sound. That’s exactly what we’re going for. The PL1 really helped on that front because it had every sound I needed.”