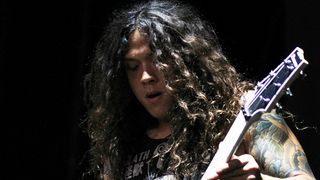 Maturity can be a dirty word for a rock band, and if you specialize in dishing out something more geared towards blast beats than backbeats, it can be downright murder. Over the years, the San Diego-based metalcore band As I Lay Dying have gradually broadened their musical range - the melodies have come into focus, the tempos pause for breath every now and then - and they've done so without losing their considerable bite.

We caught up with As I Lay Dying's lead guitarist, Nick Hipa, to talk about how he writes such rifftastic riffs, what axes and gear he's using and how Randy Rhoads helped him to become a "complete guitarist."

You've been with the band for a while now, but you weren't one of the original members. How would you say you've impacted their sound?

"[Co-guitarist] Phil [Sgrosso] and I joined at the same time, and I think we've added more of a real guitar player's touch to the band. Nothing against the guys who were in before, but I think they were more straightforward in their approach to the music. Phil and I are more into intricate guitar riffing. Plus, the way we affect the arrangements and the way we go about guitar solos - we try to push things creatively as much as we can."

How do you and Phil work as a team? Divvying up parts, not stepping on each other's toes - what's your process?

"We have a really great relationship. When we first joined the band, we didn't even know each other, but as time went on, we began to understand each other and figured out our individual strengths and weaknesses. I think we take a very objective approach to writing and playing, and that comes down to 'the best part wins, the best riff wins.' We throw ideas around, and we've learned not to be attached to anything.

"Because of that, a lot of mutual respect has been built up. We listen to what each other is doing. It's worked out well. You get a really nice blend this way. Also, [bassist] Josh [Gilbert] is playing guitar, and that adds a lot to what we're doing. But we have a very democratic way of doing things, a nice collaborative exchange of ideas."

Hipa on stage with one of his custom Ibanez ART Series guitars, 2010. © Robb D. Cohen./Retna Ltd./Corbis

You've cited Randy Rhoads as being a big influence on you. How would you say he helped shape your playing?

"When I was a kid, I didn't have technical knowledge about the guitar - that came later. But with Randy, he was so good at evoking emotions. That's something that I really strove for, and still do. How do you channel your feelings into your playing? That's something I really got from Randy, because he was so emotive. Tying together the shredder and the writer - Randy was such a great songwriter; he wrote brilliant songs - that was a big thing. It's all about being a complete guitarist and writer, and I got a lot of that from Randy."

You're pretty much into Ibanez guitars. What models do you use?

"Ibanez has their ART line. They're pretty classic-looking, single cutaway models. I really like them because I've always loved the look of Les Pauls. But I always thought that Ibanez guitars played the best. Their necks and just the way the guitars feel in my hands - they've always felt very natural to me.

"The guitars I'm playing right now are custom versions of their ART models. The majority of them have mahogany bodies with maple tops, and they have their Edge Pro bridges. I've been getting a tremolo in them, though. So those are the guitars that I mainly play.

"I also have a Destroyer and an RG that I really like. The RG is incredibly sleek and quick - I used it for a lot of solos. For random layering, we also used a Fender Jazzmaster and a Taylor acoustic. But mostly, it's the Ibanez guitars."

What's your rig setup? Do you use different types of gear on stage than in the studio?

"In the studio, we tracked rhythms with a combination of a Peavey 6505 and a Diezel VH4, and we put those through a Bogner cabinet. We had a Maxon OD-808 right in front of that. For leads, we used a Soldano SLO100 and an old Traynor head for a little bit of high end. For some of the cleaner stuff, we used a Matchless 35.

"Live, we pretty much run Axe-Fx. I'm using an Axe-Fx II through a Matrix GT1000FX power amp. I really love the technology and the versatility of Fractal products. I don't feel like I'm sacrificing or compromising at all. It all sounds great, and it's so efficient to use."

How would you say the recording of the new record differed from previous ones?

"The biggest difference was time. Usually, we take two months to record an album, with everybody recording in three or four-hour shifts. It got to be a little brutal, and things look longer than they should have. Plus, we were recording in multiple locations.

"This time we did everything in a month. [Drummer] Jordan [Mancino] went out to the studio in Colorado and recorded his drum parts, and then Phil and I stayed there and recorded together. We were each in a room and did our stuff with out own engineer. We really lived at the studio. Then, Bill Stevenson, our producer, would be in San Diego, and he'd work with [singer] Tim [Lambesis] and Josh every day. So we were able to spend a lot more time working in a less amount of time, really, and I think that was great. We were more fully immersed in the recording than ever before."

Let's get into some of the new songs. Cauterize has a flurry of blinding riffs. What's your process for coming up with the "ultimate metal riff"?

"Riffs can be very funny things, the way they come about. There's no real secret. Cauterize was a song that Josh brought in. He's really good at coming up with riffs. I don't think that he looks at the guitar in a technical sense; he just looks at it in a writing sense. He had a lot of the arrangement worked out. What happens is, we all record individually and e-mail things to one another. So when we get in a rehearsal room, there's a lot of ideas going around.

"Riffs really can go under the microscope sometimes. We'll work on them and tweak them to the point where I like them, Phil likes them and Jordan likes them. It doesn't matter who comes up with them. So that's one way. The other way is, somebody will just come up with the killer riff, and that can take hours and hours of just… using your head. [laughs]

"As for myself, it's all about keeping at it. You have to look at what you've got and make sure that it's something you're really stoked about. It's just a matter of doing it. Sometimes riffs come out of nowhere, and you know they're great immediately. Othertimes, like I said, it's about refining them till they're right. There's no one way."

In the song Waster Words, there's just as many wild riffs, but you contrast them with legato lead lines.

"Yeah. It's about trying to find the right balance, the proper context. The riffs start out pretty blistering, but there's a lot of hammer-ons and pull-offs, too. For us, it's almost like the part is too played-out to keep going on with it, so you think, What could balance this out? Trying to figure out what complements a riff, it's like a science. You have to try a bunch of different things to see what will sound good."

How do you arrive at your solos? Do you plot them out at home? Do you do a lot of improvisation in the studio? A combination of the two?

"I would say that most of them were planned out ahead of time, but they were arrived at spontaneously. I sort of loop parts and play over them until get the right framework. I think of how to get into the solo, how to get out, what it should sound like overall. A lot of dudes have a lyrical approach to playing and think of a certain flow. I try to do that, too.

"I spend hours jamming along to the loops to see what things stick out to me. I always record a version of what I think I'm going to do, and I'll send it out to the guys to get their thoughts. The majority of the time, everybody's cool with what I'm doing. Things change a bit in the studio. Sometimes I'll have an idea and improvise a little bit. It can be a little nerve-racking, but then I find that I'm really surprised by what I've come up with."

Drum-wise, Jordan sure fills up a lot of the spaces in the music. How do you tailor your playing to what he does?

"Jordan, unfortunately… I don't want to say he gets the shaft, but we always write around the riff. But what's cool is, he'll take a part that we like and he'll turn things around, and a lot of the time he'll strengthen the whole part. On the song Defender, the verse riff was pretty much the same the whole time, but Jordan changed up the drum part each time in the second half, and it added a real moving feel to it. Every time I listen to the song, that drum part really stands out to me. None of us could have thought of it. Jordan's pretty great."