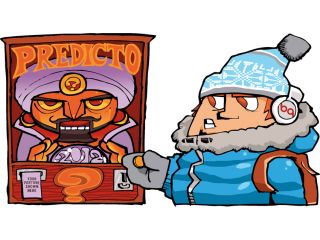 What does the future hold?

Making predictions about anything that might happen in 2012 is tricky, not least because - if we're to believe what we see and hear in the news - the global financial system could collapse under our feet at any moment.

But let's try and stay positive. Assuming we do still have a world economy to speak of, the next year could turn out to be rather interesting for computer musicians. New technologies and trends are still emerging at an incredible pace, so we thought we'd have a crack at anticipating how exactly 2012 is going to go down.

Let's start by considering that centrepiece of the modern studio, the DAW. 2011 brought some full version updates - new editions of Reason, Cubase, FL Studio, Pro Tools and Reaper are among those that spring immediately to mind - but if we're honest, these felt more like acts of consolidation than revolution.

Could we see a bigger market shake-up in 2012? FXpansion's Angus Hewlett thinks so. "Most of the big DAWs will see major updates (there are a couple long overdue, and another that's effectively already been announced), but it'll be a relatively quiet year for plug-in releases," he says.

"We may finally see a credible in-browser DAW if someone figures out a way of getting multiple channels of good quality audio in and out of the browser."

The 'long overdue' pair that Hewlett refers to is surely Apple Logic and Ableton Live, and we'd be surprised if we don't see new versions of these before the year is out. The future of Logic in particular has been subject to wild speculation, with one ghastly rumour suggesting that it may lose its plug-in support.

Our hunch is that this simply won't happen - particularly as Pro Tools, Logic's great rival, is gradually becoming more 'open', and that Logic Pro 9 has now made it onto the Mac App Store with its AU compatibility intact.

If you're after something totally new, keep an eye on Bitwig Studio, while - despite the fact that it isn't available yet - is already generating plenty of excitement.

As for fully online DAWs, we're all for the concept, but we might have to wait a short while for their time to come. We'll be surprised if Ohm Force's collaborative DAW Ohm Studio doesn't make it to release this year, though.

Moving away from desktop music-making, it seems inevitable that 2012 will be another big year for iOS. We asked Matt Borstel, developer of the supremely awesome NanoStudio, to look into his multitouch crystal ball.

"I hear from a lot of NanoStudio users who are looking for better ways to hook up external gear, so maybe we'll see hardware manufacturers bringing out more accessories with multiple audio channels and comprehensive interfacing options," he says.

"Also, there is coordinated work going on between developers to create tighter integration between audio apps, so we may see progress on that front.

"As an individual developer with limited resources, I tend to speculate over whether one of the 'big boys' from the desktop DAW market will bring an established product to the iOS scene. However, at current App Store prices, I can't see a clear standalone business case for anything that requires a development team of more than three to four people.

"This means that either App Store prices will have to increase, or larger companies will be more inclined to treat iOS apps as a loss-leader to raise awareness of their other, more profitable products."

The relative lack of interoperability between iOS apps that Borstel alludes to has remained a stumbling block throughout 2011, and it's hard not to agree with Angus Hewlett when he notes that "the iPad's limitations in terms of multitasking and plug-in-ability will have to be overcome before it can be taken seriously as a production platform".

Some progress has been made with virtual MIDI ports that enable one app to control the sounds of another, but more work is needed. Could that leave the door open, then, for another mobile OS?

"Android will finally get its act together for low-latency audio, but may be hampered by fragmentation and the slow pace of carrier updates, giving Nokia and Windows Mobile a surprise fighting chance of stealing the number two spot for musicians," predicts Hewlett.

It'd certainly be a shock to see Microsoft's mobile OS becoming a more popular music-making platform than Google's. However, Matt Borstel shares some of Hewlett's concerns about Android; in fact, he's even more pessimistic.

"Google has had a few attempts at an audio API, but the most recent one seems to consider 45ms as low-latency, and this specification appears to be optional as far as the hardware manufacturers are concerned," he says.

"I'd like to reserve some time in 2012 to do some R&D on this, but right now I'm not feeling too confident that anything will happen [in regard to an Android version of NanoStudio] any time soon."

The iPad is now often used as a controller for Mac and PC software, and the recent release of Lemur for iOS has arguably upped the ante in this area still further. Does this mean, then, that there won't be any standalone next-gen hardware controllers to get excited about?

Fortunately not, it seems: in just the past couple of months, we've heard about intriguing new touch-based controllers from Keith McMillen and Smithson Martin in the shape of the QuNeo and KS-1974 respectively, both of which do things their own way. Far from standing still, this is also a sector that's ripe for innovation.

"While it may take more than a year to gestate, something big is happening in embedded devices - machines that use low-cost, low-heat, low-power computers to perform sophisticated tasks in dedicated hardware," he says.

"The computer, now joined by iPads and such-like, continues to remain at the centre of our work. But embedded technology just keeps getting better. That means that - driven by a desire to get away from both laptops and the 'plain glass' feel of the iPad - some users will increasingly look to hardware.

"An affordable box can run a looper you design on a computer, or perform sophisticated effects. And, in our computer-dominated lives, we'll seek out those tangible experiences: something that feels physical, that pushes back when we push it, something we can play hard. It won't make the computer or your shiny new iPad less useful, but it could be that we finally start to see independent objects that make music - that have the feeling of instruments - with all of the intelligence of our computers lurking inside."

To return to where we started, there is a genuine risk that the challenging financial climate could restrict companies' ability to innovate in 2012, and that they'll err on the side of caution and take the safe option wherever possible. However, there are still strong signs of life in the computer music market, and we'd like to think that there are exciting times ahead.

Liked this? Now read: The best of NAMM 2012: guitar, tech and drum highlights