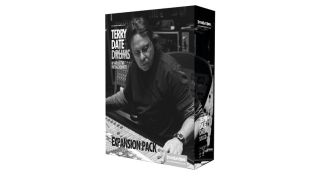 Steven Slate's drum sample packs have been amazing users for the last few years - the latest incarnation, SSD4 Platinum comes with a tonne of kits designed for different genres, plus unofficial 'signature' kits tailored by producer/mixer Steven Slate to sound like many famous recorded drum sounds from AC/DC to Zeppelin. The latest expansion pack has been created with the help of rock and metal demigod producer, Terry Date.

If, for some reason that name isn't familiar to you, perhaps you'll recognise Terry Date's drum sounds from artists like Soundgarden, Pantera, Incubus, Limp Bizkit and Slipknot. However, one of Date's most famous credits is Deftones.

The distinctive drum sound from albums like Around The Fur and White Pony are the stuff of drummers' dreams, and this pack includes samples of Abe Cunningham's OCDP vented maple snare used on White Pony.

In total, the pack includes 10 kit presets made from seven different OC snare drums - ash, bell brass, brass and maple - plus nine different OC kick drums, comprising birch, basswood and maple. All of these hinge around the same OC tom samples (10", 12", 14" and 16" maple), a single pair of hi-hats, one ride, four crashes and a china.

Of course, this is an expansion pack, so you'll need Slate's SSD4 Player host to be able to use them. At the time of writing, the cheapest way of getting your hands on it is to opt for the SSD 4 Custom set, (an additional $39).

The SSD4 player is loaded as an audio instrument in your chosen recording software - from here you can load one of the preset kits or build your own by dragging and dropping samples onto the relevant drums. Once your kit is built, you can tweak their pitch, velocity curve, mapping and individual articulation volumes (so balancing the levels between, say, a centre-snare hit and rimshot) plus more.

The most effective bit, though, is the Mixer section. Here you have control over multiple mic positions on kicks and snares, plus all the close, overhead and room mic settings. The kits themselves are every bit as authentic to Date's sound as we'd hoped - with very little tweaking, it's easy to get those grooves from Around The Fur and Vulgar Display Of Power sounding properly authentic.

However, we did find ourselves wanting a little more variation, particularly from the toms, but hey - if you ask for Terry Date's drum sound, don't feel let down when you get it by the bucket-load!