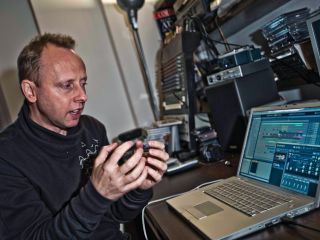 Scanner: he's got a whole world of sound in his hands.

Robin Rimbaud, AKA Scanner, is about as prolific as it's possible for one person to be. A pioneer of sampling, Robin made a name for himself by scanning the airways and intercepting mobile phone communications, then weaving the recorded results into his musical compositions.

Those early recordings put him on the musical and cultural map, and he's since gone on to extend his myriad tentacles into all manner of musical endeavours. He's always experimental and always busy, whether scoring contemporary dance, recording and producing with his band Githead, soundtracking films or collaborating with classical musicians. And even with all this on his plate, Robin still finds time to lecture at universities in the UK and France.

Such a prolific and pioneering master of manipulating recorded sound would clearly have many insights into the world of sampling past, present and future - which is precisely why we caught up with him at his East London base.

What's your history with sampling? We remember that you used to spin elements into your sets on three MiniDisc players…

"Sampling has always been part of my sound language. I began using cassette recorders as a kid. I'd record conversations on the school bus, the sound of peas defrosting, the fridge, the roar of a car engine… and then I'd collage them together into tape releases for friends. It was more a discovery about being able to store these moments and share them - and remember, this is before the days of digital technology and its ability to capture and stream almost anything in real time.

"When I went on holiday to Italy with some friends at the age of 18, I barely took any photos but I recorded my entire trip, from leaving home, travelling through the airport and checking in at the hotel to walking through the streets of Florence, all on cassette. This clearly had implications for many of my creative endeavours over the years.

"When I went on holiday to Italy with some friends at the age of 18, I barely took any photos but I recorded my entire trip."

"My sound world opened up when I was given a TEAC reel-to-reel tape recorder by my English teacher at school. Suddenly, instead of placing one sound after another on a tape and following a linear narrative, with each sound preceding the next, I could layer sounds and create combinations. I know this may sound trivial, but sometimes just the simplest of discoveries like this can alter a whole mode of thinking. It meant that I could combine different sound worlds together, from slowing down voices to creating tape loops of repeating motifs.

"Sampling the world around me became part of my language, the same way a playwright like Harold Pinter would sit in cafés and note down the conversations of people around him. Ambitiously, I saved up and bought an Akai S-1000, to this day one of the best-sounding machines I've ever used, with a whole one minute of recording time on floppy disc. At the time this was extraordinary, and I found ways to expand the sounds by slowing them down so that a half-second recording of a door creak could play out for 30 seconds once I had stretched it out.

"Of course, the use of the radio scanner early on in my works - where I picked up these indiscriminate voices and conversations from the ether, like people chatting on their mobile phones - was a way to incorporate the very mundane and real world around me into my music, sampling it and then introducing it into the darker, more abstract sonic landscapes I was composing. It was also, I suppose, a way of humanising what was then often accused of being 'faceless techno bollocks'!"

"Totally. The ability to draw on the world around you as well as exploring whole new unexpected dimensions has been so liberating. I was listening to the middle abstract section of Led Zeppelin's Whole Lotta Love recently and thinking how, heard in isolation, this section is the most abstract piece of composition I've ever heard in a popular rock song - where the instruments seem to collapse in on themselves, and where the band are almost deconstructing the idea of what rock music can be. Though it's not strictly sampling per se, the band have almost resampled themselves inside-out. It's an extraordinary moment of analogue resampling and processing.

"So, much of the music we hear today takes from elements from elsewhere. Without going into detail, one might be able to deconstruct any popular electronic song and discover the DNA of its genesis. It could easily be argued that without the development of sampling, our musical landscape as we know it today would be shaped in quite a radically different manner. Everything seems to draw on everything else, not just in terms of inspiration but by incorporating elements directly.

"Many of my projects have used sampling as a key element in their production. Working with contemporary dance, I'm often given references from classical music to draw upon, so I'll resample them and process them extensively: that way they become something completely different, yet still exhibit some of the original source language in some way. It's like learning to speak another vocabulary.

"Native Instruments' Kontakt is a daily tool in my compositional work - it always rears its handsome head somewhere in a production. Writing string pieces that sound so authentic is still a pleasure!"

Where do you think sampling is headed, technologically speaking? We're thinking largely about developments like Celemony's Melodyne DNA technology and the new creative vistas that are opening up as a result.

"I think the technology is still at a point of dynamic development. When I first sampled sounds on my Akai S-1000, I found it remarkable and inspiring that I could slow down, speed up, reverse and stretch sounds to such an extent that they became something completely new, but today technology has made leaps that are almost beyond comprehension.

"In the past we were left very much on the surface of the sound - we were able to stretch it like a rubber band but not actually slip inside the material and open it out to the extent that we can with the kind of software developments that Melodyne has created, where we can alter notes within polyphonic audio material.

"These days we're able to take the very atoms of a sound apart, remodelling it and producing something totally new. I'd always argued that creative sampling is a type of science, taking sounds from here and there like a doctor would with reference and research materials - but nowadays you don't even need a lab coat to engage in this process!"

Who has most impressed you with their creative use of sampling as an art form?

"There have been some remarkably inspiring pioneers, such as Pierre Schaeffer and Pierre Henry in France. In their philosophy - known as musique concrète - any sound was fair game, and studios became hotbeds of acoustic experimentation.

"In the UK, the influence of the BBC Radiophonic Workshop has undoubtedly been an inspiration for many, almost by a process of osmosis, as these otherworldly sounds were absorbed by a generation of kids watching Doctor Who and black-and-white Sunday movies with some surprisingly exploratory soundtracks.

"These days we're able to take the very atoms of a sound apart, remodelling it and producing something totally new."

"Hip-hop in the 80s was clearly an inspiration for figures such as Jack Dangers in his Meat Beat Manifesto incarnation. Then there was John Oswald from Canada - in his Plunderphonics project he stole musical culture from all over the place and carried it into his astonishing work Plexure, which took almost a thousand micro-samples of popular music and collaged them together into an all-out musical barrage.

"Today the seamless quality of sampling is a far cry from earlier efforts. The work of Murcof and Amon Tobin, for example, uses a multitude of samples, but manipulated to such an extent that we are transported to previously unimagined places within our sonic world."

What advice would you give to our readers when it comes to pushing creative boundaries?

"I suppose the most important thing is to recognise that there are no boundaries - except those you put upon yourself. However, it's also vital to find your own voice. Take Daft Punk, for example - like many acts they've used sampling to define their sound, drawing in sources from a rich musical history, but they still maintain and exhibit a voice that is instantly recognisable as their own. That's essential in any musical climate.

"It's absolutely essential that you find ways to make your sound your own, be it through production, processing, editing, style or arrangements. You clearly want your work to stand out, so think about what actually makes you sound like you. Listen to other music and consider what it is about a Girl Talk or DJ Shadow record that always expresses that act's particular identity and brand.

"Sampling can take you to many unimagined places, far beyond the reaches of more traditional means. So, embrace those possibilities and become an adventurer, taking the listener to a place that they might never have anticipated."

For a comprehensive selection of sampling tutorials and techniques, check out the Computer Music Sampling Special (issue 48) which is on sale now.